Johnson accused YouTube of “censoring the truth” on Friday evening after his roundtable discussion video, which featured “stories from doctors, scientists and the vaccine injured,” was taken off the platform and led to his temporary suspension.

For the 5th time this year, @YouTube is censoring me from telling you the truth. This time they don't want you to hear 3.5 hours of stories from doctors, scientists and the vaccine injured.At least you can still watch it for yourself on @rumblevideohttps://t.co/IBOcjxZyu9

In the video, the Republican senator listed statistics relating to alleged vaccine side-effect victims, while his guests made comments questioning the effectiveness of Covid-19 vaccines in preventing death.

“Why won’t they let the vaccine injured tell their stories and medical experts give a second opinion?” Johnson questioned in a statement. “Why can’t we discuss the harmful effects of mandates?

“Apparently, the Biden administration and federal health agencies must not be questioned,” he said. 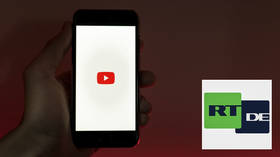 READ MORE: Tech giant YouTube doesn’t seem to know why it banned our channels, head of RT DE reveals, as fight to restore them continues

In its own statement, YouTube cited policies on reducing “the risk of real-world harm” and “preventing the spread of harmful misinformation” as the reason behind Johnson’s suspension.

It is the second time that the senator has been suspended by the platform, and his account could be permanently removed if he receives further sanctions within the next 90 days.

Since May 2020, YouTube has enforced a lengthy ‘Covid-19 medical misinformation policy’, which prohibits users from questioning the effectiveness of vaccines or claiming that they can “cause death, infertility, miscarriage, autism, or contraction of other infectious diseases.”

In January, YouTube even suspended the sitting president of the United States after it accused Donald Trump of violating policies which prohibit the incitement of violence.