“Cyber Marines” could be deployed on battlefields in future to reshape conflict zones, using technological warfare to disrupt enemy activities and influence local populations, the US military has confirmed.

Speaking to C4ISRNET’s CyberCon, Colonel Brian Russell, the commander of the II MEF Information Group, claimed that the “cyber Marines” will be able to operate on the front lines of conflict to “adjust the software on sensors and systems in real time.”

This ability to react to the technological needs of warfare in the moment will be designed to ensure that military personnel can “reprogram” equipment in a way that will let them “achieve operational outcomes,” which previously might not have been possible.

As “cyber Marines” become more central to the Army’s plans, Russell indicated that the US Army would seek to use technological warfare to reshape the battlefield. Citing areas where the soldiers could be effective, the colonel pointed to “influencing the local population, taking out an enemy network, disrupting the enemy’s kill chain and more.”

Whether you like it or not, or realize it or not, all of our Marines are involved in this information environment, and we need to prepare them for that reality.

“The best thing I can do as a commander in support of retention is to give them mission: let them operate in the cyber domain, let them perform those influence functions, let them do what they came in to do,” Russell stated.

Laying out the plan for integrating these soldiers into the military, Russell highlighted how the Army is planning to take advantage of “a good number of Marines that love to code in their off time” and have the skills required for it. 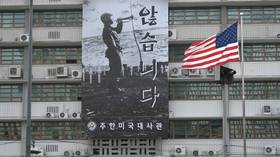 US diplomat flees after hit-and-run, hides at military base – police

The US Cyber Command was established in 2010 to bolster America’s technological warfare capabilities, with the Marine branch engaging in defensive and offensive operations. In recent years, America has sought to modernize the command, improving its ability to address cyberattacks and attempts to disrupt networks or cause power outages.

As it stands, the US Marine Corps has three network battalions and three network activities dedicated to the Cyber Command’s efforts, focusing on a variety of threats or ways to create military advantages depending on their geographical location.