A Federal Reserve official has warned that inflation is only bound to get worse for Americans, at least for the next few months, before it “likely” begins to “taper off.”

“The math suggests we’re probably going to see somewhat higher readings over the next few months before they likely start to taper off,” Minneapolis Federal Reserve Chairman Neel Kashkari told ‘Face the Nation’ on Sunday.

According to Kashkari, current inflation and supply chain issues are a result of a “surge in demand for goods,” as well as the Covid-19 pandemic, both problems the Federal Reserve official refers to as “temporary.” The increase in demand, Kashkari claimed, is partly because “Congress has given a lot of money to families and businesses to get through the pandemic.” 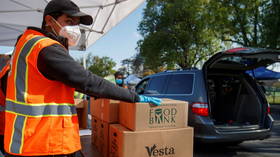 Inflation rates are currently at a 30-year high, according to data from the US Labor Department.

While Kashkari admits the “pain” US consumers are feeling is real, the government shouldn’t “set long term monetary policy and- and adjust too much based on temporary factors, even if those temporary factors take a little bit longer than we expect.”

Over the next six to nine months, he added, “we’re going to get a lot more data on both the demand side and the supply side to get a better reading of where the economy is headed.”

President Joe Biden and his administration have faced heavy scrutiny over inflation, with Americans seeing the price of gas and food rise dramatically, while also dealing with massive supply chain issues that have slowed the movement of goods.

Biden directly addressed the issues on Sunday in a tweet where he claimed that Americans may be facing prices that are “too high,” but they are also apparently in the middle of “a historic economic recovery” and cited his controversial and expensive Build Back Better plan as the solution to Americans’ economic woes.

COVID-19 has disrupted supply chains around the world. Now, even in the midst of a historic economic recovery, Americans are facing prices that are just too high. We must pass the Build Back Better Act to lower costs for working families and help get people back to work.