US wholesale prices continued to balloon at the fastest rate on record in October, portending further pressure on household budgets as rising costs ripple through the world’s largest economy.

The producer price index (PPI) last month climbed 8.6% from a year earlier as energy costs jumped, the US Bureau of Labor Statistics said on Tuesday. Excluding food, energy and trade, the index climbed 6.2% on year. 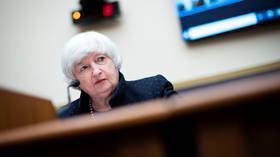 Forget Yellen’s promises… US inflation is out of control, and we could be heading back to the dark days of the 1970s

PPI is a key measure of US inflation, as increases in the prices that producers pay for goods and services tend to be passed on to consumers – at least to the extent that the market will bear. Consumer prices rose at an annual pace of 5.4% in September, the highest rate in 13 years.

October’s 8.6% jump in PPI on an annual basis matched the all-time high set in September. Prices increased by 0.6% from the previous month, following a 0.5% advance in September, the government said. Energy costs surged 4.8% on month, rising at eight times the rate of the overall index.

After rising at an annual rate of less than 1% in each of the final three months of 2020, PPI began to accelerate. The index rose 1.6% in January, the month that President Joe Biden took office, then nearly doubled in February and continued to gain steam throughout the year, exceeding 7% from May through October.

Biden has tried to downplay the inflation crisis as a “transitory” phenomenon amid the US economic recovery from the Covid-19 pandemic. Left-wing media outlet MSNBC on Monday argued that the current inflationary trend is being overblown and is actually a “good thing” because it reflects a strong economy.

Also on rt.com MSNBC claims jump in US inflation is a ‘GOOD THING’, actually

Biden’s Treasury secretary, Janet Yellen, has said that prices will stabilize by the end of this year, but Goldman Sachs economists warned on Sunday that “the inflation overshoot will likely get worse before it gets better.” Inflation metrics will remain “quite high” for much of 2022, the bank said after previously predicting a quick end to the crisis.