A US federal judge has tossed Texas Governor Greg Abbott’s statewide ban on mask requirements in public schools, ruling that the order put children with disabilities in danger and violated federal law.

In a ruling on Wednesday, US District Court Judge Lee Yeakel said that Abbott’s May executive order – which barred government agencies, including public schools, from mandating face masks – was at odds with the 1990 Americans with Disabilities Act and put children with health conditions at higher risk.

“The spread of Covid-19 poses an even greater risk for children with special health needs,” Yeakel said, adding that the governor’s order excluded “disabled children from participating in and denies them the benefits” of public schools and the “programs, services, and activities to which they are entitled.”

The ruling could affect as many as 5.3 million students in Texas, according to state records. 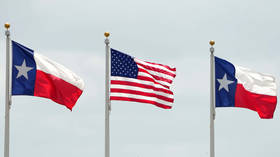 Should Texas go it alone? Ted Cruz thinks secession can’t be written off

The decision comes amid a lengthy legal battle over Covid-19 mandates in the state, with the suit over masks in schools launched in August by activist group Disability Rights Texas, which argued that school district leaders, and not the governor, should make decisions for which rules to implement. Before being heard by a federal judge, the case made its way through the Texas Supreme Court, which temporarily sided with the governor, and later the plaintiffs, in a series of rulings earlier this year, though it left the executive order intact.

Texas Attorney General Ken Paxton – who was named as a defendant in the suit alongside the governor and the commissioner of the Texas Education Agency, Mike Morath – said he “strongly disagree[s]” with the ruling, and that his office is now “considering all legal avenues to challenge this decision.” In addition to finding Abbott’s order in breach of federal law, the judge also barred Paxton from enforcing it.

The US Department of Education under President Joe Biden opened a civil rights investigation over the ban on mask mandates in September, informing the state government of the probe after the Texas Education Agency issued a memo saying that “school systems cannot require students or staff to wear a mask.” Similar letters were sent to other states prohibiting mandates, including Florida, Iowa, Oklahoma, South Carolina, Tennessee and Utah. They were each told their policies could be preventing schools “from meeting their legal obligations not to discriminate based on disability and from providing an equal educational opportunity to students with disabilities,” staking out an argument much like the one Judge Yeakel made on Wednesday.