Consumer prices in the US rose 6.2% in October compared with the same period last year, as Americans battle soaring food, gas and property costs, and the highest inflation rate since 1990.

Reporting the latest Consumer Price Index (CPI) figures on Wednesday, the US Labor Department said soaring inflation has cut into the recent gains made in wages, as the country rebounds from the impact of the Covid-19 pandemic. 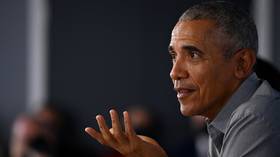 The department’s all-items index showed an increase of 6.2% over the 12 months ending October, marking the largest annual increase since November 1990.

“The inflation overshoot will likely get worse before it gets better,” Goldman Sachs economists warned ahead of the release of the CPI data.

Federal Reserve chair Jerome Powell had suggested previously that the spiking inflation rate is just a “transitory” situation due to the swift economic changes post-pandemic, though he admitted last week that the situation could persist through the first half of next year.

The Fed is set to reduce the monthly bond purchases it started last year in response to the Covid pandemic to boost the economy – and it is expected to increase its benchmark interest rate up from record near-zero lows earlier than expected.

Centrist Democratic Senator Joe Manchin criticized the Biden administration on Wednesday, dismissing assurances that the situation will be short-lived.

“From the grocery store to the gas pump, Americans know the inflation tax is real,” he wrote on Twitter.