Under lockdown, mosques in Kenya offer virtual prayers for Ramadan 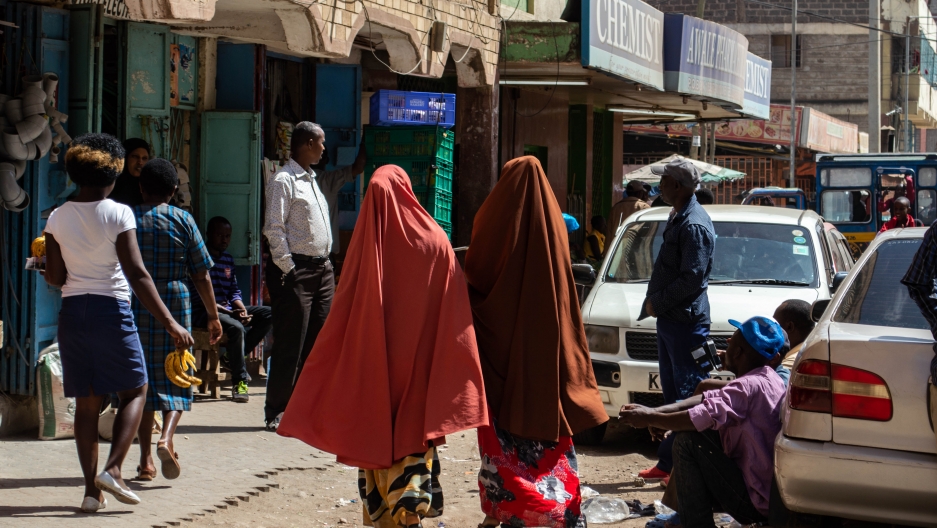 Women walk down the streets of Eastleigh neighborhood of Nairobi, Kenya, Jan. 19, 2019. The neighborhood is currently under quarantine due to a spike in coronavirus cases.

On a normal Friday during Ramadan, Ahmed Ali Mohamed would head to the mosque with his family and friends to break the fast.

“Then [we’d] head home and have a feast with friends, and family, and relatives, sometimes at my grandmother’s or mother’s house,” he said from his home in Nairobi, Kenya. “But this Ramadan has been very different.”

Related: How coronavirus is changing the way Muslims celebrate Ramadan

Eastleigh, a predominantly Muslim neighborhood where Mohamed’s mother and grandmother live, is currently under lockdown, and most mosques have closed. Instead, some mosques are offering virtual prayers via YouTube.

“I can’t visit at all. No one is allowed,” said Mohamed, who lives in another area of Nairobi. He notes how police and soldiers have put up roadblocks in Eastleigh to prevent people from moving in and out of the neighborhood.

On May 7, the Kenyan government announced the 15-day lockdown in Eastleigh after the neighborhood saw a spike in COVID-19 cases. Some accused officials of discriminating against Muslims, because they had also locked down Old Town, a predominantly Muslim area in the coastal city of Mombasa.

“There is no effort to target anyone,” Kenya’s Interior Minister Fred Matiangi told Muslim leaders earlier this week. “We are suffering equally. This disease does not choose where you come from.”

Mohamed didn’t feel the lockdown was singling out Muslims. In fact, he recalled how Islamic scripture has specific guidelines on what people should do during a pandemic or a plague.

“Any place that is under quarantine, you shouldn’t go in. And if you are inside you shouldn’t come out,” he said. “That’s hadith [saying] from the prophet, peace be upon him.”

Still, like many in Nairobi, he worries about how his family will deal with the effects of the lockdown. “Most of the people who used to go into Eastleigh come from outside. The small traders. The ones who bring fresh groceries, they don’t come into Eastleigh anymore.”

Residents and workers of Eastleigh initially protested the lockdown, leading officials to allow essential workers to come in and out of the neighborhood.

But Mohamed, who trades wholesale goods like sugar and flour, says the increasingly narrow lockdowns are cutting off food supply not only in Eastleigh but in the whole country.

Weeks before the Eastleigh quarantine, the government had announced a citywide lockdown, meaning Mohamed cannot leave Nairobi for work.

Even dates — a favorite Ramadan treats — are scarce or overpriced.

“We used to have dates, lots of dates from mostly the Middle Eastern countries, or North Africa,” said Mohamed. “We don’t get them because there are no goods coming into the country,” he continued.

Without iftar feasts to look forward to, Mohamed is spending Ramadan at home with his wife Fatimah, and their two small children.

Instead of going to the mosque, they pray at home. “The majority of the mosques do have YouTube pages, so you can follow the sermons on YouTube,” said Mohamed.

“Spiritually, you have to go online if you want to interact or see or ask any questions with the imams.”

Mohamed points to Jamia mosque, which closed its doors for the first time in 95 years due to the pandemic. The mosque’s TV channel, Horizon TV, regularly releases virtual prayers, programming for children, and interviews with scientists and experts.

As religious leaders in other parts of the region seek to undermine the threat of the coronavirus, Jamia is trying to drive a different message to its congregants who are spending Ramadan at home.