Attorneys for the 45th president and Trump Organization filed the complaint before a federal judge in the Northern District of New York, multiple outlets reported on Monday.

“Letitia James targets President Trump with a callous disregard for the ethical and moral obligations she swore to abide by when she became attorney general,” attorney Alina Habba said in a statement. “She has shortchanged the state by commencing this partisan investigation and has forever tarnished the sanctity of her office.”

The lawsuit is intended “to not only hold her accountable for her blatant constitutional violations, but to stop her bitter crusade to punish her political opponents in its tracks,” Habba added. 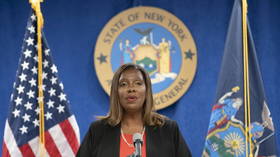 James, a Democrat, was elected AG in 2018 after campaigning on investigating Trump’s business dealings. She had her eyes set on the governor’s office as well, but on December 9 suspended her campaign and decided to run for re-election, saying there were “important investigations” she needed to finish. Earlier that day, her office had announced Trump was being summoned to give a deposition on January 7.

“The Trump Organization has continually sought to delay our investigation into its business dealings,” James said in response to the lawsuit. “Our investigation will continue undeterred because no one is above the law, not even someone with the name Trump.”

James is alleging that the Trump Organization lied about the value of their assets to either banks or tax offices, to gain favorable loan terms or minimize taxes. Trump’s real-estate business remains headquartered in New York, though the 45th president officially relocated to Florida during his term in the White House, citing Democrat “witch hunts” in his home state.