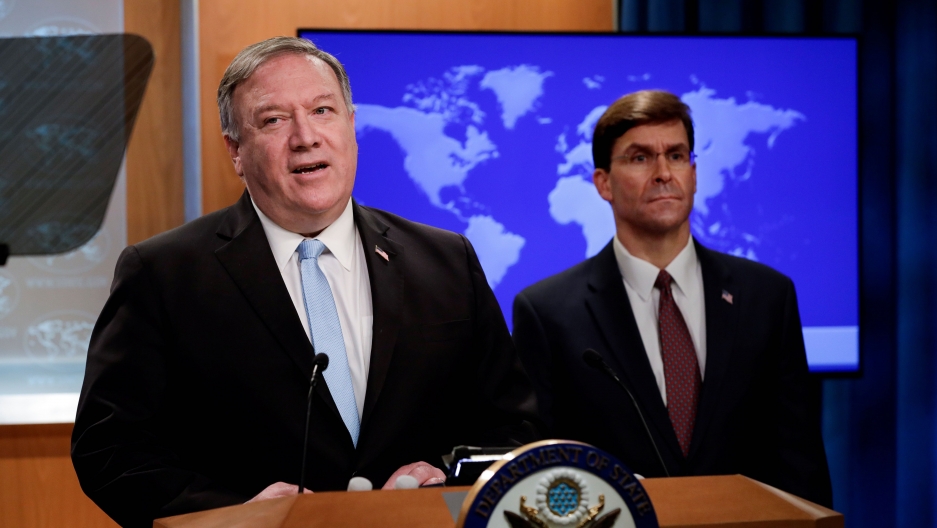 US Secretary of State Mike Pompeo speaks about a Trump administration executive order on the International Criminal Court as Defense Secretary Mark Esper listens during a joint news conference at the State Department in Washington, June 11, 2020.

When war crimes happen, and victims can’t get justice in their own country, there’s one place they can go: the International Criminal Court in The Hague. But now, that same court is being challenged by the Trump administration.

On Thursday, President Donald Trump issued an executive order placing visa restrictions and economic sanctions on members of the ICC and their families.

Related: What South Africa can teach the US about racial justice and reconciliation

He said he took that action because of the ICC’s investigation into alleged atrocities by US military members in Afghanistan. In March, judges at the ICC gave prosecutors the go-ahead to look into possible torture and other war crimes.

“As US investigations by the military, by the Congress make clear, United States citizens did commit serious violations of international law.”

“As US investigations by the military, by the Congress make clear, United States citizens did commit serious violations of international law,” said Katherine Gallagher, who represents two individuals who remain detained at the Guantanamo Bay detention camp without charge. “But we’ve seen for the past two decades no investigations and no prosecutions of senior US officials.”

Therefore, Gallagher said it’s appropriate for the ICC to be investigating US military members. But the Trump administration has long opposed the investigation, and US Secretary of State Mike Pompeo said the president has now taken steps that will hopefully stop it. The administration is also concerned about the possibility of the ICC investigating Israel’s actions in Palestinian territories.

“We cannot and we will not stand by as our people are threatened by a kangaroo court,” Pompeo said, “and indeed, I have a message to many close allies around the world: Your people could be next.”

Pompeo said the president is holding the ICC accountable for exceeding its mandate, engaging in a politically motivated investigation, and challenging US sovereignty. Attorney General Bill Barr took it a step further, announcing an investigation by the Department of Justice into the ICC.

“The US government has reason to doubt the honesty of the ICC,” Barr said, adding that the DOJ has “substantial credible information” of a long history of corruption and malfeasance at the ICC.

“Worse yet, we are concerned that foreign powers like Russia are also manipulating the ICC in pursuit of their own agenda.”

But that concern was rejected by Stephen Rapp, who was US ambassador-at-large for war crimes during the Obama administration.

“I mean, this is just absolutely preposterous,” Rapp said. “These are allegations with no proof whatsoever.”

Rapp said that the Obama administration held off an ICC investigation into Afghanistan war crimes by showing the court that they were looking into it themselves. But now, by openly opposing the ICC, he said the Trump administration is undermining the global community’s ability to bring war criminals to justice.

“We’re wounding ourselves, frankly, and making ourselves less of a leader when it comes to upholding human rights in the world.”

Stephen Rapp, US ambassador-at-large for war crimes during the Obama administration

“We’re wounding ourselves, frankly, and making ourselves less of a leader when it comes to upholding human rights in the world,” he said.

Related: Shocked Afghans ask why perpetrators targeted a maternity hospital and a funeral

Trump administration officials point out the United States isn’t a member of the ICC, but the country has worked regularly with the international court to bring war criminals to justice. And the court has the mandate to prosecute crimes committed in any of the 123 countries that are a part of the ICC, including Afghanistan.

“It boils down to the fundamental of — you can’t escape accountability when you go elsewhere and commit crimes,” said Akila Radhakrishnan, president of the Global Justice Center. “We need to cut through the veneer of what’s really driving what this is, which is a fundamental position of the US government that it should not be held accountable, and its closest ally, Israel, shouldn’t be held accountable.”

The new US sanctions on ICC personnel probably won’t stop the court’s investigation of war crimes in Afghanistan, said Nancy Combs, a human rights lawyer at the College of William and Mary Law School.

“Once the United States comes out with guns blaring this way and tries to intimidate the court in the way that it has, one might expect a counterproductive response; the ICC prides itself on its independence. And so now, if it were to not bring prosecutions against the United States, it might look as though it’s been intimidated,” she said.

The International Criminal Court has released a statement that says it stands by its staff and its commitment to justice. O-Gon Kwon, president of the ICC’s oversight and legislative body, the Assembly of States Parties, said he’s convening a meeting next week for the group to consider how to renew its “unwavering commitment to the Court.”