Beatmaker and producer Karima 2G uses music to speak out against racism in Italy. She advocates for second-generation Italians who are born in Italy, but denied citizenship at birth because their parents were migrants from Africa, Latin America and Asia.

A screenshot from Liberian Italian artist Karima 2G’s 2014 music video, “Bunga Bunga,” in which she raps about racism and objectification of women.

Anna Maria Gehnyei, a petite woman with a miniafro and frayed jeans, shouts into a microphone at Piazza del Popolo, or the Peoples’ Square, a prime spot for protests of all kinds in Rome.

The daughter of Liberians parents, Gehnyei was one of the thousands of young Italians of all backgrounds who protested on June 7,  in the wake of the murder of Black American George Floyd by a white police officer in the United States.

Related: Black Lives Matter organizers in the US and UK compare movements 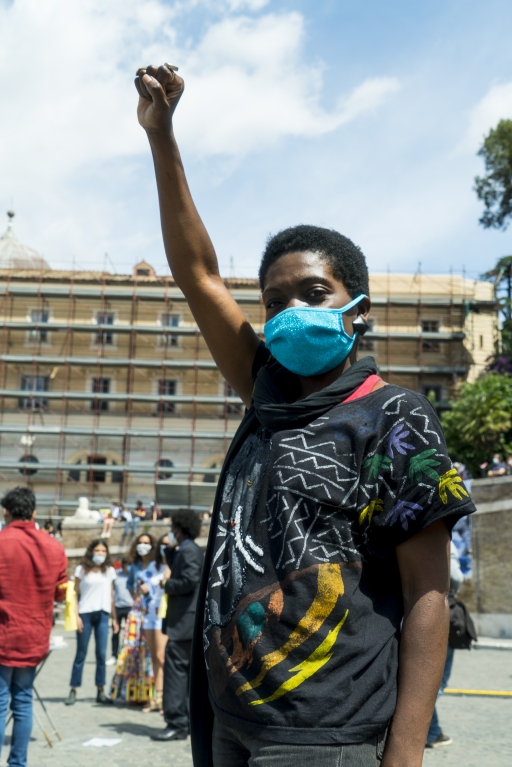 But in Italy, activists fighting against racism have a central demand linked to national identity: Young, Black Italians are fighting to become citizens. Born and raised in Italy, these children of African immigrants are denied citizenship at birth. By law, they are considered “second-generation” foreigners.

Gehnyei, who was born in Rome, has become an activist for second-generation youth. Over the years, she has amplified her cause through her music as a rapper and beatmaker.

Wherever she goes, she prefers to be called by her stage name, Karima 2G. Karima means kind and generous in Arabic and Swahili. And 2G stands for Second Generation, for the 1 million young people who grew up in Italy without citizenship, born to African, Latin American and Asian parents.

“I do music to send a message and to express anger and the need to be recognized as an Italian, but also as a Black woman in Italy.”

“I do music to send a message and to express anger and the need to be recognized as an Italian, but also as a Black woman in Italy,” Karima said.

Karima’s style is called Bantu Juke Fever, a mix of techno, hip-hop, reggae, Chicago Juke and grime. Although she addresses an Italian niche audience, Karima 2G sings in Pidgin English — her family roots are in Liberia, but her stories come from Italy.  She often returns to a theme in her music: tackling Italian racism.

Related: How US protests highlight ‘anti-black racism across the globe’

One of the very first songs she produced is called “Orangutan.”  In it, she slams an Italian senator who compared Italy’s first-ever Black government minister — a woman — to an ape.

Karima tells The World that growing up as a Black woman in Rome was difficult. She’s been called the N-word. And twice, the police held her at a bus stop, assuming she was a prostitute.

In another song titled, “Bunga Bunga,” she criticizes the objectification of Black women.

Karima is known to stir uncomfortable conversations through her art. However, she knows how to disarm a white audience and get them to listen. In 2015, she opened a concert for American rapper Azealia Banks in Milan. That night, she went on stage in front of 20,000 people, wrapped in an Italian flag.

“And I remember the crowd looking at me and like, ‘Oh my God, she is doing that! A Black girl wearing the Italian flag,’ so it was very provocative,” Karima told The World. “And when I explained the reality of the second generation, the crowd was completely silent.”

After the concert, a man from the audience went backstage and expressed sympathy for the second-generation struggle, which he admitted he knew nothing about.

Second-generation foreigners can try to become Italian citizens when they turn 18.  But they only get 12 months to file an application and must wait a minimum of four years to hear back from the government.  Guido Tintori, an expert in European immigration policy at the FIERI research center in Turin, says that the odds are stacked against them.

“They have to produce proof of continuous, uninterrupted and legal residence in Italy since birth, which is very, very demanding,” Tintori said. “Especially because their legal status is not dependent on them, it’s dependent on their parents but also on the Italian bureaucracy and the Italian laws about immigration,” he added.  If their visa expired at any point in their life, their application will be rejected.

While most European countries relaxed their nationality laws in the 1990s, Italy made it more difficult for second-generation youth born in Italy to become Italians. At the same time, Italy provides a fast lane for anyone with blood ties to Italy. This is why an American, a Brazilian or an Argentinian with an Italian great, great grandfather can get citizenship more easily than a second-generation person, a 2G, whose entire world is in Italy.

Angelica Pesarini is Black Italian and teaches at New York University in Florence. She researches race and nationality, focusing on Italy’s fascist past. She says the historic period under dictator Benito Mussolini had a lasting effect on national identity.

“Italian identity is profoundly based in whiteness, being Black and Italian for some is a sort of an oxymoron. … If Italians are white, all the Black bodies we see, they don’t belong, they must come from somewhere else, so we are not too interested in their rights.”

“Italian identity is profoundly based in whiteness, being Black and Italian for some is a sort of an oxymoron,” she said.  “If Italians are white, all the Black bodies we see, they don’t belong, they must come from somewhere else, so we are not too interested in their rights,” said Pesarini.

Karima 2G’s message has been out for a few years. Song after song, she pushes Italy to reexamine its relationship with race.  At the recent rally, she invited Italian people of color to organize themselves and ride the global wave of the Black Lives Matter movement.

“I think we are living a very historical moment right now,” Karima said.  “A lot of people are still experiencing racism, but I think that we can come together and kind of create a sort of leadership, you know, to empower myself, to empower women most of all, because I believe in women, and to gain also a Black loyalty — an Italian, Black loyalty,” she said.