This African American in Ghana says making Juneteenth a federal holiday is a ‘small gesture.’ She urges police reform. 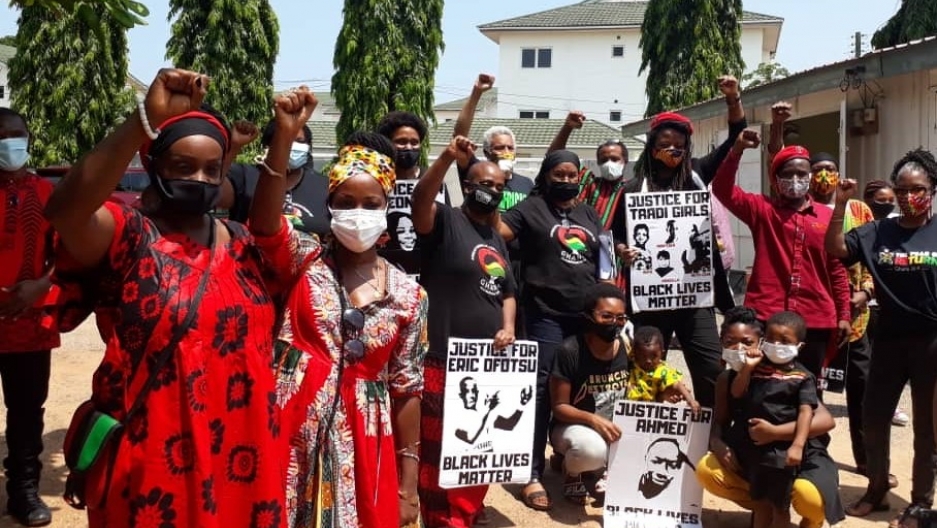 The news that slavery had ended reached Texas on June 19, 1865 — two years after the Emancipation Proclamation was issued.

Annual celebrations and events mark the end of slavery, but this year there’s renewed focus on the holiday amid recent protests pushing for racial equality and systemic change in the US and around the world.

Even corporate America is getting on board — companies like Twitter and Spotify are offering employees paid holidays on Friday. And there’s currently an effort to make Juneteenth a federal holiday.

Mona Boyd, an African American, celebrates Juneteenth in Ghana, where she’s lived for the past 30 years. She moved there from the US in the 1990s.

Boyd talked with The World from Accra, after returning from a  Juneteenth celebration, to explain how the day is celebrated in Ghana and the changes she’d like to see in the US.

“When I came to Ghana, I found a community of African Americans already celebrating this holiday. So, I joined them to celebrate it,” Boyd said. “And since that time, many people have joined us, many Ghanaians, in celebrating the holiday. So, I would say there’s a good knowledge of it. It’s not a holiday that people celebrate when you go upcountry. But down here in Accra, which has people from everywhere, it’s celebrated.”

Related: A professor with Ghanaian roots unearths a slave castle’s history — and her own

Marco Werman: I know from your own story, Mona, that you left the US because you did not think it was a good place to raise your son. How does that affect how you think about Juneteenth?

Mona Boyd: Juneteenth is a holiday that I’m much more connected to than July 4. July 4 was always just a holiday, a free day. But Juneteenth has a lot of significance because it actually means something to me. It was the day that my ancestors learned that they were no longer slaves, that they were now free.

This year, of course, Juneteenth comes in the midst of some major introspection and anger about the deaths of black people at the hands of police in this country. What is it like to observe from Ghana, the protests and the focus on police violence against African Americans right now?

Well, I have kind of mixed feelings because we have been there before. I’m not sure that much will change when it’s all over. You know, I grew up in the rural south under Jim Crow. So, you know, I know racism. I lived in an all-black world because of racism until I went to college. So, I have really mixed feelings about what it will all come to. I think that we need to have some new strategies.

If you look at American society, the country, everything is based on economics and the kind of capitalistic system that we have. Someone has got to be, from my perspective, someone has got to be at the bottom or else it may not work as well. And I think that what we need to do as black people is try to develop an economic strategy that will lift us from that bottom, which will then give us more power and more control over our lives and over how we are treated in the society.

You know, I’m not a big fan of integration, to be honest with you. I grew up in an all-black town and 50% of the people were self-employed. My father’s father bought his farm. He had been out of slavery maybe 20, 25 years. And then he and his son kept adding onto the land until it got up to around 500 acres. So, we were quite independent. We weren’t marginalized, and we didn’t really have to worry about people respecting us.

I understand your emphasis on creating wealth, but isn’t integration key, though, to eliminating otherness? Like to get people comfortable with the fact that we are all humans?

You know, we all know that. So, why do we have to tell you that? I didn’t feel this way until I left America. Because I had a chance to live in a place where race was not an issue. So, for almost 30 years, I haven’t really in my personal life had to deal with race. So, I was able to step back. Some things are about race. Some things are not about race. And I think if black people don’t do everything through the lens of race, then I think it would be much easier for us to deal with some of these social inequities in our society.

You know, every white person in America, from my perspective, is part of the problem. They know racism is systemic in every arena of America and they benefit from it. I’m not sure people are really willing to give it up. So, this is why I think black people need to start thinking about it differently. I mean, we shouldn’t have to tell people our lives matter. Because for many people, our lives don’t matter to them. And I think that we should decide our lives matter. And this is what we’re going to do to protect our lives on a daily basis. But I think one of the strategies that we have not gone near is looking at what we can do economically because we have a lot of money. We have a lot of money. And we really need to look at how that money is employed in America.

You raised something a moment ago that I want to ask you about — the idea that capitalism needs somebody on the bottom. How do you change that in a world that is driven by profit?

I’m not sure that you change it. I think that you concentrate on how you lessen its impact on you. I don’t see America changing its economic system at all. But, you know, other countries have dealt with this issue. Scandinavian countries tax their people at a 45% rate. So, everybody can have health care, education and enough food, a place to stay. It’s just the American value system, which is solely built on capitalism and nothing else matters.

You said earlier, Mona, how much more Juneteenth means to you than July 4. There is a movement undertaken by a Republican lawmaker from Texas to make it a federal holiday. What do you think about that? I mean, it’s symbolic, is it important to have that?

Well, you know, we have been celebrating Juneteenth probably since slavery on our own without it being a holiday. They can make it a holiday. Personally, it doesn’t matter to me because I’m interested in a much bigger picture than a holiday in terms of change in America. I mean, pass the law that prevents chokeholds. Get rid of the law where cops will have immunity no matter what they do and how they do it. Those are the things that matter to me.

I can continue to celebrate Juneteenth, as I have been, you know, since I started. We cannot think that these little gestures actually are going to give us the results that we need to have happen. They won’t. We’ll just have another holiday.

This interview has been condensed and edited.