140 ships and vessels set out on a long voyage 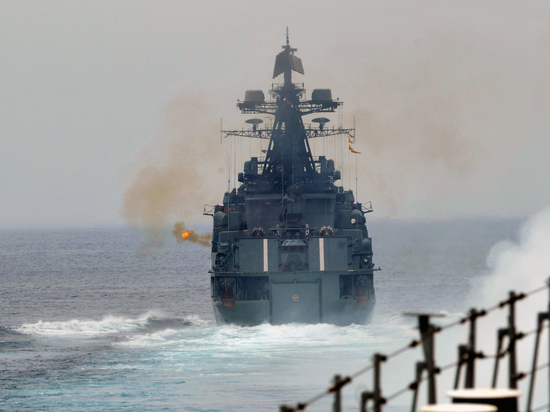 The newest frigate “Admiral of the Fleet of the Soviet Union Gorshkov”, the large anti-submarine ship “Severomorsk”, the large landing ship “Ivan Gren”, the missile cruiser “Marshal Ustinov”, the frigate “Admiral of the Fleet Kasatonov”, the large anti-submarine ship “Vice-Admiral Kulakov” ”, submarines, support vessels. In total, the crews of 30 ships, submarines and support vessels, 20 aircraft and helicopters were involved in the exercise.

Exercises in the Arctic are just one episode of the combat training of the Russian Navy. In January-February, he conducts a series of naval exercises under the general supervision of the Commander-in-Chief of the Navy, Admiral Nikolai Evmenov. The Navy and Aerospace Forces are practicing actions to protect Russian national interests in the World Ocean, as well as to counter military threats from sea and ocean directions. More than 140 warships and support vessels, more than 60 aircraft and helicopters were involved.

Thus, the joint Russian-Chinese naval exercise “Peaceful Sea-2022” was held in the Arabian Sea the day before. The Russian Navy was represented by a detachment of Pacific Fleet ships: the guards missile cruiser Varyag, the large anti-submarine ship Admiral Tributs, and the large sea tanker Boris Butoma. The Chinese Navy was represented by the Urumqi missile destroyer and the Taihu supply ship. The naval sailors of the two countries worked out the release of a conditionally captured ship.

At the same time, a detachment of ships of the Baltic Fleet, consisting of the corvettes Stoykiy and Soobrazitelny, went on a long voyage. The goal is to ensure the naval presence and demonstrate the Andreevsky flag in various areas of the World Ocean.