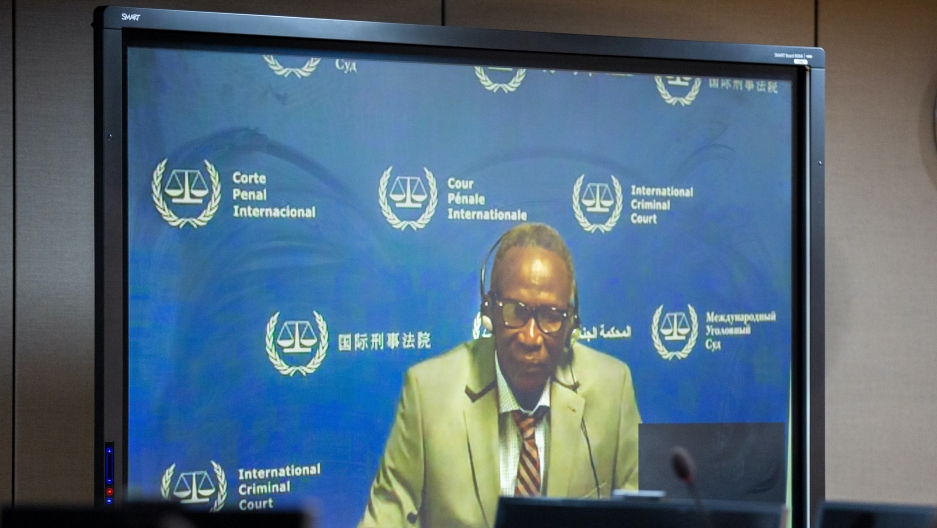 Sudanese war crimes suspect Ali Kushayb, who preferred to be named Ali Muhammad Ali Abd-al-Rahman, is seen on a screen during an initial appearance at the International Criminal Court in The Hague, June 15, 2020.

After more than a decade evading charges of war crimes and crimes against humanity in Darfur, a Sudanese suspect, Ali Muhammad Ali Abd-al-Rahman, widely known as Ali Kushayb, finally appeared in court.

On Monday, the 70-year-old could be seen via video link from an International Criminal Court (ICC) detention center, where he had been transferred last week after surrendering himself in the Central African Republic.

The prosecution in The Hague spent 30 minutes reading out more than 50 charges against Kushayb, an alleged senior leader of the Janjaweed, a government-supported Arab militia responsible for atrocities in the Darfur region of western Sudan.

The conflict, which the United States later called a genocide against Indigenous Africans, left an estimated 300,00 people dead and more than 2 million displaced.

In his initial pretrial appearance, Kushayb dismissed the charges as “untrue,” signaling what would become a lengthy, drawn-out trial.

Still, for some Darfuris, Kushayb’s arrest is a sign that justice, long-elusive, could be on the horizon.

“I was very happy because Ali Kushayb surrender[ing] himself to ICC is an important step to satisfy the victims of genocide.”

“I was very happy because Ali Kushayb surrender[ing] himself to ICC is an important step to satisfy the victims of genocide,” said Mutasim Ali, a 33-year-old activist who recently graduated from George Washington University with a degree in comparative law.

Ali was 16 years old when the conflict in Darfur broke out in 2003, disrupting his otherwise peaceful rural childhood.

“When the war broke out, my family and I were separated because the village was destroyed by the Sudanese government — the militia.”

His village, Daba Neira, lies in the mountainous Jebel Marra region, which for years was besieged by government-linked militias and “scorched-earth” attacks, according to Amnesty International.

“They’re now living in displaced person camps in North Darfur State,” said Ali, who fled Sudan in 2007 after being arrested for criticizing the government.

Sudan at a crossroads

Kushayb’s arrest comes at a transformative moment in Sudan, where a transitional, civilian-led government is tasked with moving the country toward democracy after 30 years of dictatorship under Omar al-Bashir, who was ousted last year following months of massive protests.

While the government has made social and political breakthroughs in a short time —  recovering billions in stolen assets, expanding religious freedoms and normalizing relations with the US — it has been slow to deliver justice to victims of the Bashir regime.

Related: A year after revolution, Sudan celebrates but still faces squeeze of sanctions

That’s especially true in Darfur, which has yet to feel the promise of transformation.

“For me, the situation in Darfur is still in bad condition,” said Yahia Shogar, a doctor working in West Darfur, who is part of the rapid response team trying to curb the spread of the coronavirus.

As Sudan struggles to fight the coronavirus with limited resources, Kushayb’s arrest has renewed attention to the unique challenges in Darfur, where thousands remain in displacement camps supported mostly by international humanitarian aid.

Insecurity and violence persist, propelled by intercommunal clashes and attacks on civilians by armed militias.

“These conflicts have a direct correlation with health impact. Sometimes we have no way to reach areas far from us.”

“These conflicts have a direct correlation with health impact. Sometimes, we have no way to reach areas far from us,” said Shogar, who notes there is also distrust toward the transitional government. Some members are linked to crimes in Darfur, notably Mohamed Hamdan “Hemeti” Dagolo, deputy head of the sovereign council — and former Janjaweed leader.

“People deny there’s coronavirus in Sudan or in Darfur,” said Shogar, who contracted COVID-19 himself.

“People say that it’s a political issue,” he continued, explaining he and other medical professionals are trying to educate distrustful communities.

“The change that is happening in [other parts of] Sudan is not seen in Darfur,” said Ali, the student.

Sitting in his apartment in Washington, DC, where Black Lives Matter protests have erupted in recent weeks, Ali compares the experience of black Americans to what is happening at home.

He worries that unless the problems in Darfur are addressed, the situation could become “explosive” — especially given the continued proliferation of arms in the region, and the anticipated drawdown of United Nations peacekeepers.

Sudan’s new government is now responsible for making peace with rebel movements on the country’s margins, including South Kordofan, Blue Nile — and Darfur.

“Our main problem in Sudan is to address the root cause of the political problems. That is what we Darfuris demand.”

“Our main problem in Sudan is to address the root cause of the political problems. That is what we Darfuris demand,” said Nimir Abdelrahman, a chief negotiator for the Sudan Liberation Movement Transitional Council, a Darfuri rebel group.

This week, Darfuri armed and unarmed rebel groups are negotiating with the Sudanese government in neighboring Juba, South Sudan, with hopes of reaching a peace deal by June 20, which will officially end the conflict in Darfur.

“The security situation in Darfur has deteriorated, it is very bad,” Abdelrahman said. “We are trying for the Darfur [groups] and the government forces to establish a joint military command to help the people on the ground.”

“The government in Khartoum should hand over those wanted by the International Criminal Court,” said Abdelrahman. “For those who are not indicted — we agree to establish a Darfur criminal court.”

There are four remaining Sudanese suspects wanted by the ICC for crimes in Darfur, including former President Bashir, who is currently in Kober prison in Khartoum.

It’s unclear whether those suspects will be extradited to the ICC, or tried jointly in Sudan.