A Nashville preacher is being hailed a hero after he tackled and disarmed a man who pulled out a gun in his church and threatened parishioners, preventing any shots from being fired.

The harrowing incident occurred on Sunday at the Nashville Light Mission Pentecostal Church, when a 26-year-old man later identified as Dezire Baganda left his seat on the front row, pulled out a gun, and walked up to the altar, police said. Surveillance video from the small church shows the suspect holding his pistol up high and waving it, apparently gesturing for congregants to come forward.

WATCH — NORTH NASHVILLE — “man walks up to the altar with a gun at Nashville Light Mission Pentecostal Church, waves it around, points it at congregation… pastor Ezekiel Ndikumana prays, heroically tackles him and he’s disarmed without a shot fired…” https://t.co/4grV1jC0p7pic.twitter.com/i2TESKE9Cl

Police said Baganda pointed the gun at church members and told everyone to get up. The Rev. Ezekiel Ndikumana, who had been praying with several parishioners at the front of the church when Baganda stepped up to the altar, is seen on the video clip circling around the assailant, before charging him from behind and tackling him to the ground. 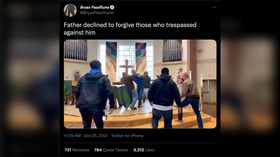 Several church members helped Ndikumana disarm the gunman and hold him down until police arrived. Baganda has been charged with 15 counts of felony aggravated assault, and more charges will likely be added, police said.

Baganda wasn’t a member of Nashville Light Mission but had attended services at the church previously. He was reportedly told not to return last February after disrupting sermons.

Ndikumana told Nashville’s ABC News affiliate, WKRN-TV, that God used him to prevent a tragedy. “[Baganda] wanted to kill,” the pastor said of the assailant. “That’s what first came to my mind.”

He hesitated to take credit for saving the lives of his church members, saying they were in God’s hands. “God wanted to show that he’s a powerful God,” Ndikumana said. “One main thing I said, we had faith.”

Baganda reportedly told police as he was being arrested that he was Jesus and that all churches and schools needed to be shot up.