After being handed a Covid vaccination non-compliance letter, a firefighter at the Los Angeles Fire Department (LAFD) reportedly dropped his pants and wiped his buttocks with the document.

The notice was visibly stained with fecal matter as a result, according to media reports. The LAFD is currently investigating the alleged incident that took place on November 18, a spokesperson said on Wednesday. Commenting on the case to the LA Times, she also said the firefighter is currently on paid administrative leave and “will face the consequences of any inappropriate acts.” 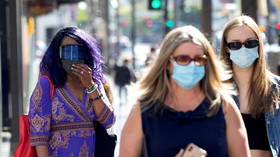 READ MORE: Mask up, even in your own house, city orders

The Stentorians of Los Angeles City, a group that represents African Americans in the LAFD, filed a statement to management in which the group slammed what it described as an “act of blatant disrespect and harassment,” enclosing a photo of what looks like a stained document. The Stentorians went on to demand “swift and immediate action” from the mayor and the LA Fire Commission “to deter any city employee from feeling entitled and not encouraged but empowered to behave in such an embarrassing and threatening manner.”

The president of the commission, Jimmie Woods Gray, told the LA Times on Wednesday that she was “beyond appalled at such an act by an LAFD firefighter,” adding that “strong corrective action” was needed.The Los Angeles mayor’s office, in turn, expressed its hope that “fire department leadership will handle this matter definitively, and make it clear that these appalling actions will not deter enforcement of rules that we’ve put in place to save lives.”

All city employees in Los Angeles have been ordered to get vaccinated or provide proof of an exemption by December 18 under pain of being put on unpaid leave.