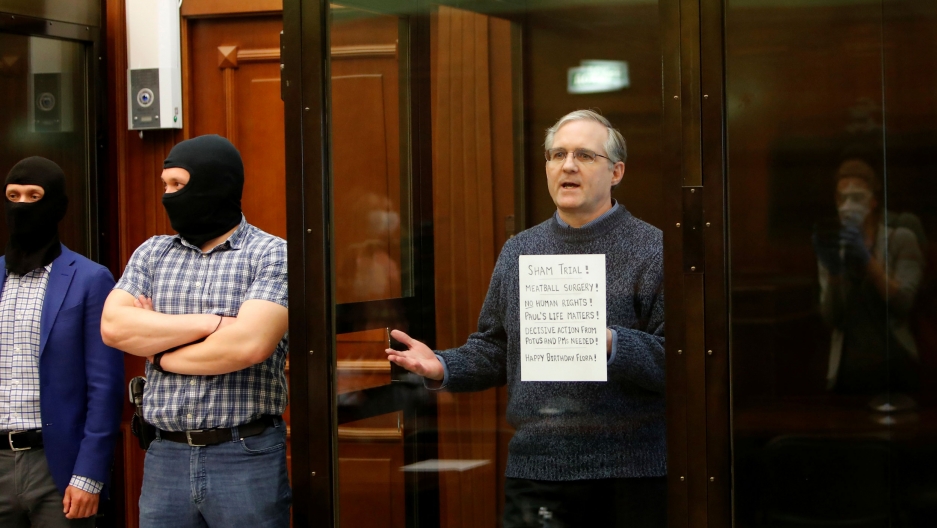 Former US Marine Paul Whelan holds a sign as he stands inside a defendants’ cage during his verdict hearing in Moscow, Russia, June 15, 2020.

Ex-US marine Paul Whelan has been found guilty by the Moscow City Court of spying charges, in what he called a “sham trial.” Whelan, 50, was sentenced to 16 years of hard labor by the Russian court Monday. In 2018, he was arrested in a Moscow hotel room with a flash drive that authorities say held state secrets. Whelan says he was set up with a USB stick, which he believed to contain family photos.

The case has strained US-Russia relations, though the White House has not been vocal about Whelan’s situation. US Ambassador to Russia John Sullivan condemned the verdict, calling the trial an “egregious violation of human rights,” and criticized the embassy’s lack of access to Whelan. Whelan’s lawyers may lodge an appeal, and his family has called on the US to take steps to bring him home.

In the Philippines, journalist Maria Ressa, founder of the investigative Rappler Media, and her former colleague, Reynaldo Santos, have become the first journalists to be convicted of cyber libel under a highly scrutinized law that opponents warned would be used to silence critics of controversial President Rodrigo Duterte’s government. The Committee to Protect Journalists called Monday’s conviction an “outrageous crime against press freedom.” Ressa and Santos will appeal, but could face up to six years in prison.

The World spoke with Maria Ressa last April: “Democracies can turn overnight. You can lose rights very quickly and I’m shocked at what’s happened to the Philippines. So — hold the line. I always say, ‘Hold the line.’ I think we need to demand accountability. We need to stop impunity. Those are the two main things.”

Some areas of Beijing are reentering lockdowns after China’s capital city reported 36 new cases of the novel coronavirus in a single day, likely linked to an outbreak at the Xinfadi wholesale market. In US states with support for Donald Trump, Republican skepticism about the threat of the pandemic could be shifting as the number of cases of COVID-19 increases by the hundreds or more per day. Research suggests that racial attitudes could have reinforced an “empathy gap” for virus victims, which have disproportionately been people of color.

In New Zealand, 20,000 fans became some of the first in the world to regather in person for a sporting event — a rugby match on Saturday. The country has been declared essentially virus-free after strict lockdown measures beginning in March effectively quashed the virus there.

Racism against African Americans in China escalates amid coronavirus 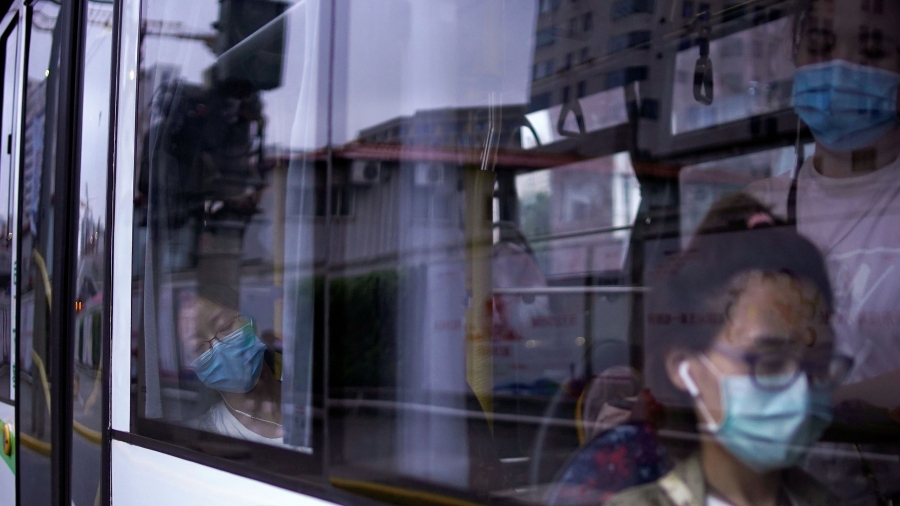 Four years ago, JC, a teacher and poet from Mississippi, moved to China with her husband and two children on a grand adventure. Now, she teaches literature to high schoolers in Guangzhou.

But she says life has changed amid the coronavirus pandemic. In mid-April, reports of “imported cases” of COVID-19 from abroad triggered a wave of anti-foreigner sentiment across China, especially toward black people.

‘Travel bubbles’: Who’s in and who’s out of the plan to save global tourism 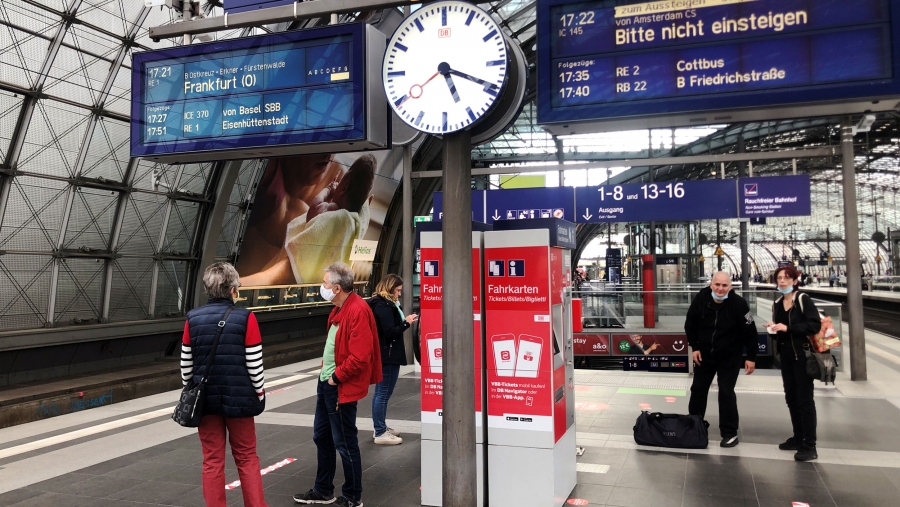 Passengers wait for a regional train at the main train station in Berlin during the coronavirus disease (COVID-19) outbreak, in Berlin, Germany, June 10, 2020.

The coronavirus pandemic has brought leisure travel to a standstill. International tourism could decline by up to 80% this year, according to the United Nations World Tourism Organization. Now, just as the Northern Hemisphere enters the summer season, governments around the world are trying to revitalize their tourism economies.

And: Sweden’s handling of coronavirus drives some people to relocate

Watching Canadian Prime Minister Justin Trudeau’s moptop emerge is one way to keep track of the calendar, says The New York Times (and this GIF 👇). 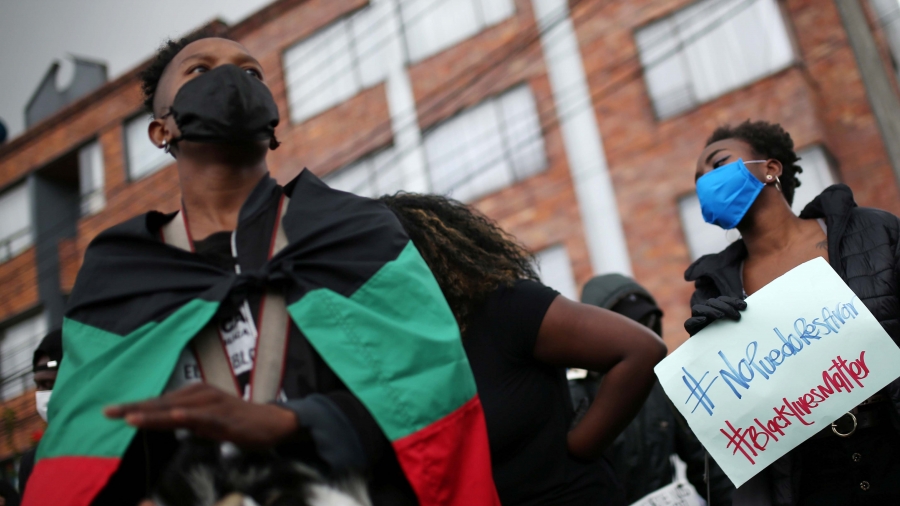 A demonstrator wearing a face mask as a preventive measure against the coronavirus disease (COVID-19), holds a sign that reads “I can’t breathe, black lives matter” during a protest against the death in Minneapolis police custody of George Floyd and the arrival of U.S. troops in Colombian territory, in Bogota, Colombia June 3, 2020.

The World continues its coverage of campaigns for police reform across the globe. Host Marco Werman speaks with Siana Bangura, an organizer in London, and Miski Noor, an activist with Black Visions Collective in Minneapolis. Also, The World’s Jorge Valencia has a story about police killings in Latin America.  Tensions continue to escalate between the US and China. The US Navy is dispatching two aircraft carriers plus support ships to the western Pacific, a powerful signal to Beijing. Host Marco Werman speaks with military analyst Sim Tack about the escalations. With international tourism falling off a cliff, governments are trying to mitigate things by allowing their citizens to visit neighboring countries. But with “travel bubbles” forming around the world, the US hasn’t been invited to buddy up with anybody. The World’s Bianca Hillier has more. And, US President Donald Trump authorized economic sanctions against the International Criminal Court this week, unhappy about efforts to investigate US personnel. The World’s Rupa Shenoy reports.