Minutes after the jury at the Kyle Rittenhouse murder trial found the teenager not guilty on all counts, Judge Bruce Schroeder took a moment to tell the jurors any safety concerns they have would be “addressed and respected.”

After four days of deliberation, a jury on Friday acquitted Kyle Rittenhouse of murder and reckless endangerment – charges that stemmed from his fatal shooting of Joseph Rosenbaum and Anthony Huber, and his wounding of Gaige Grosskreutz during ‘Black Lives Matter’ riots in Kenosha, Wisconsin, last August.

Once the verdict was read, Schroeder took a moment to address juror safety concerns.

Judge Schroeder tells the jury to inform him if they're being harassed by the media or if their safety is threatened. pic.twitter.com/FZKV9QH2yK

“At the beginning of the trial there was some concern about information and your safety, and I assure you that we will take every measure to make sure that your concerns are addressed and respected,” Schroeder told the jurors, before asking to speak to them in private on this matter afterwards.

Schroeder reminded the jurors that they were under no obligation to speak to the media, and that the press would submit requests for contact in writing, which the jurors could opt to ignore if they so wished. 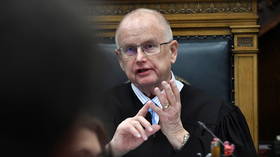 “If anyone does contact you, just tell them you’re not interested in discussing it, if that’s the case,” he explained. “If anyone persists in doing so, report them to us and it will be addressed.”

Rittenhouse’s trial was a national spectacle, watched intently by the media, often to the chagrin of Schroeder. On Thursday, the judge banned MSNBC reporters from the courtroom after a producer for the network was caught following a bus transporting the jury. Schroeder described the incident as an “extremely serious matter” that would be “referred to the proper authorities.”

And just a day earlier, Schroeder called media coverage of the trial – which saw pundits attempt to analyze the judge’s biases by examining everything from offhand jokes about lunch, to his phone’s ringtone – as “scary” and “grossly irresponsible.” In addition to probing media coverage, Schroeder reportedly received death threats throughout the trial.

As the jury deliberated, crowds of protesters had gathered outside the courthouse for days. Fights erupted and chants – ranging from “f**k Kyle!” to “free Kyle!” – rang out near the room where the jury was deciding Rittenhouse’s fate.

The incident on Thursday with the MSNBC producer was not the first time someone was suspected of attempting to compromise the anonymity of the jury. Earlier this month, police officers caught someone filming jurors as a bus picked them up en route to the Kenosha County Courthouse. Officers forced the person to delete the footage.