The 2022 midterms are shaping up badly for the ruling Democrats, the New York Times claims, identifying the culprit: the “highly distorted congressional map” and Republican gerrymandering.

Democrats currently have an eight-seat majority in the House of Representatives, but all 435 seats will be up for re-election in November 2022. With the congressional maps being redrawn to match the 2020 census, the US paper of record points to Republicans “gerrymandering” the districts in states where they control the legislatures.

Republicans’ upper hand in the redistricting process, combined with plunging approval ratings for President Biden and the Democratic Party, provides the party with what could be a nearly insurmountable advantage in the 2022 midterm elections. via @NYTimeshttps://t.co/2f7pfGSTEY

Gerrymandering is “carried out by both parties but predominantly by Republicans,” according to the Times. With 12 states completing their maps so far, the redistricting makes the GOP more likely to win five congressional seats in Iowa, North Carolina, Texas and Montana – and it needs only five seats to “flip” control of the House.

Last year, only 61 House races were contested, with the vast majority of members getting elected in “safe” districts. Following the 2018 midterms, House Speaker Nancy Pelosi (D-California) famously said that a “glass of water would win with a D next to its name” in her district, or in the one represented by Alexandria Ocasio-Cortez (D-New York). 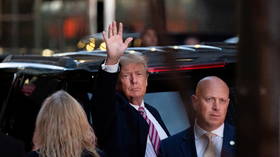 READ MORE: Trump attacks Congress’ ‘subversion of justice’ while US ‘is going to hell’

Gerrymandering is almost as old as the US itself. The phenomenon got its name from a salamander-shaped district around Boston, created in 1812 by Massachusetts Governor Elbridge Gerry.

The US Constitution requires the congressional districts to be redrawn after every decennial census, to ensure equal representation in the House. The task is generally the purview of state legislatures, except in a handful of states where it has been delegated to “nonpartisan expert” commissions. The apportionment census results announced in April saw seven states lose one House seat each on account of decreasing population, while five other states gained one seat each, and Texas gained two.

Republicans are redrawing maps out of “fear of what would happen if we actually had a real democracy,” according to former Ohio Democratic Party chairman David Pepper.

Democratic-controlled states such as New York have drafted maps that would eliminate Republicans as well. Maryland may be about to get rid of its sole GOP member of Congress, while the Illinois state legislature has already approved a map that would eliminate two Republican districts and replace them with a Democrat one.

Citing the supposedly perilous state of voting rights, Democrats have repeatedly tried to pass bills that would federalize elections and codify into law emergency practices adopted in 2020 on account of the Covid-19 pandemic, such as mail-in voting and ballot harvesting.