US pharmaceutical giant Pfizer has agreed a $5.29 billion deal with the American government to provide 10 million doses of its new Covid-19 oral antiviral drug, Paxlovid.

“This promising treatment could help accelerate our path out of this pandemic by offering another life-saving tool for people who get sick with Covid-19,” Xavier Becerra, secretary of the United States Department of Health and Human Services, said on Thursday. 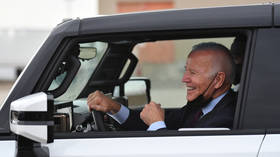 Under the deal, Pfizer is to deliver some 10 million courses of its antiviral drug for the treatment of Covid-19 at a cost of $5.29 billion to the US taxpayer. The company says it cuts the chance of hospitalization or death for adults at risk of severe disease by 89%.

The pharma giant expects to manufacture 180,000 courses of the treatment by the end of December, and intends to produce at least 50 million by the end of next year.

In a statement released after the deal was announced, US President Joe Biden said courses would be available from the end of the year. “My administration is making the necessary preparations now to ensure these treatments will be easily accessible and free,” he added, but reiterated that “vaccines remain our strongest tool” against the virus.

The Biden administration has also signed a $2.2 billion deal with Merck and Ridgeback Biotherapeutics for their Covid-19 pill. However, that drug, Molnupiravir, is not as effective as Pfizer’s oral treatment, only halving the chance of dying or being hospitalized in patients susceptible to serious illness.

On Thursday, Anglo-Swedish healthcare giant AstraZeneca stated that its preventative Covid-19 drug, delivered as a shot in the arm, offered 83% protection over six months, providing a further boost in the fight against Covid-19.