A young man who pleaded guilty to raping one girl and sexually assaulting three others has been spared jail time by a New York judge. News of the sentencing decision reportedly left his victims and the courtroom stunned.

Christopher Belter, 20, was sentenced on Tuesday for the 2018 first-degree rape of a 16-year-old girl at his family home in Lewistown, New York, as well as the sexual assault of three other teenage girls – two 16-year-olds and a 15-year-old – between 2017 and 2018.

Belter had been facing eight years in prison, but was instead handed eight years’ probation. 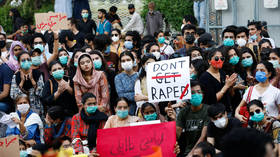 “I agonized – I’m not ashamed to say that I actually prayed over what is the appropriate sentence in this case. Because there was great pain. There was great harm – There were multiple crimes committed in the case,” Judge Matthew Murphy said, according to local news outlet WKBW. The judge went on to tell Belter: “It seems to me that a sentence that involves incarceration or partial incarceration isn’t appropriate, so I am going to sentence you to probation.”

He will have to register as a sex offender, and Murphy said that probation would “be like a sword hanging over” Belter’s head for the next eight years. The judge did not elaborate further on why the rapist was spared imprisonment, however.

Belter was a teenager at the time of all four incidents. He is described by the New York Times as “a student at an elite private boys school whose family’s western New York home was known as a party house where teens gathered to consume liquor, marijuana and Adderall.”

The court heard horrifying details of the first-degree rape, with one of the victim’s statements – read out by hte judge – telling how “during the rape, he told her to stop being such a baby. She focused her attention on the leaves of the plant as she cried during the attack.”

News of the verdict devastated one of Belter’s victims, who was in the courtroom as Judge Murphy announced that her attacker would walk free.

“My client threw up in the ladies room following the sentencing,” the girl’s lawyer told the New York Times, adding that “if Chris Belter was not a white defendant from a rich and influential family” he “would surely have been sentenced to prison.”

Meanwhile, news of the verdict caused outrage online. “You know what would be better?,” one commenter wrote on Twitter. “Jail time for raping four girls.”

Convicted rapist Christopher Belter sexually assaulted 4 teenage girls in 2018 and a judge just sentenced him to probation. He won't receive any jail time for his actions. Judge Matthew Murphy is a disgrace to the state of New York. pic.twitter.com/9yITgv62kZ