Amazon mogul Jeff Bezos has given a $100 million gift to the Obama Foundation, which will finance its global leadership programs and see the plaza at their lavish Chicago presidential center named after a civil rights leader.

The foundation headed by former President Barack Obama and his wife Michelle said on Monday that Bezos’ gift is the largest individual contribution they’ve received to date and is intended to “help expand the scope of programming that reaches emerging leaders in the United States and around the world.” 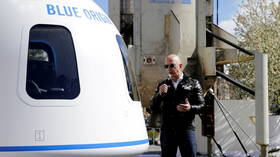 READ MORE: Amazon’s Bezos predicts only limited number of people will get to remain on Earth

The only string attached is that the plaza at the Obama Presidential Center, currently under construction in Chicago, be named after the late Congressman John Lewis, a 1960s civil rights activist.

“Freedom fighters deserve a special place in the pantheon of heroes, and I can’t think of a more fitting person to honor with this gift than John Lewis, a great American leader and a man of extraordinary decency and courage,” Bezos said. “I’m thrilled to support President and Mrs. Obama and their Foundation in its mission to train and inspire tomorrow’s leaders.”

In naming the plaza after Lewis, the foundation wishes to “change the paradigm” about naming public places, traditionally named after the donors themselves. At the Obama Presidential Center, however, donors will have the option “to honor and elevate the names of those who have fought for a more just and equitable world.”

In addition to this, the “generous unrestricted gift” from Bezos will fund other Obama Foundation activities, from the Global Leaders Program to Girls Opportunity Alliance and My Brother’s Keeper, as well as the Hometown Fund intended to invest in Chicago’s South Side, foundation CEO Valerie Jarrett explained.

Construction on the Obama Presidential Center – which will not feature a traditional presidential library – began in August. The 19-acre complex is expected to take four years to build, at a cost of around $830 million.