President Joe Biden is expected to nominate Robert Califf to lead the Food and Drug Administration, a job he briefly held during the Obama administration. He was hired by Google’s parent company after leaving the public sector.

The nomination of Califf to the position, which remained unfilled since Biden’s inauguration, is expected later on Friday. His tenure under Obama was a relatively short one, lasting less than a year. 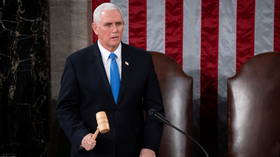 Califf is a cardiologist, who spent most of his career at Duke University, his alma mater. Before becoming FDA’s commissioner in February 2016, he served in the agency’s Office of Medical Products and Tobacco for about a year.

In 2019, he was hired by Alphabet, Google’s parent company, to head its medical strategy. He received the position after acting as a consultant for the tech giant for over two years.

The Biden administration was almost out of time to find the replacement for acting FDA commissioner Janet Woodcock, who is required by law to abandon her temporary role on Monday, unless someone is nominated for her job.

Califf’s nomination by Obama received bipartisan support, but his newfound ties with the private sector and acute partisan division may make his confirmation process into an intense battle in the current split Senate.