Those planning on celebrating New York City’s iconic New Year’s Eve party in Times Square will need to be fully vaccinated against Covid or provide proof of a negative test to join in on the festivities.

Mayor Bill De Blasio announced on Tuesday that crowds will be allowed back into Times Square this year to ring in 2022 – but there will be strict Covid-19 vaccination guidelines in place.

De Blasio said the city wants to invite “hundreds of thousands of folks,” as long as each one is inoculated against Covid-19.

“Join the crowd, join the joy, join a historic moment as New York City provides further evidence to the world that we are 100% back,” said De Blasio.

The mayor himself received scrutiny at least year’s New Year’s Eve event after dancing maskless while the city remained shut down. 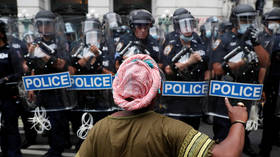 The president of the Times Square Alliance, Tom Harris, has announced that all attendees must be fully vaccinated against the coronavirus. Those with a disability preventing them from being inoculated must provide a negative Covid-19 test, taken within the previous 72 hours. Children aged five and younger can only attend if they are accompanied by a fully-vaccinated adult.

The ball drop in Times Square draws thousands to New York City every year, with millions more watching the celebration on television. The size of the event, the mayor claimed, required much greater precaution to be taken than at other events in the city, which was under some of the strictest Covid-19 shutdowns in the country last year.

“It makes sense to protect everyone,” De Blasio said about enforcing vaccinations amidst the crowd, which typically gathers in Times Square hours before the actual ball drops to signify the new year’s arrival.

The Times Square announcement has been met with some skepticism by critics, with many pointing out the potential difficulties in enforcement, as well as the fact that those who go to the event will still likely interact with people at restaurants and bars before gathering for the celebration.

This is an efficient way to keep more Black people out of Times Square. https://t.co/MqhLwltFhE

via @NYTimes Wafaa El-Sadr, an epidemiology professor at Columbia University, expressed similar concerns: “I would say, ‘I’ll wait for another year and choose to watch it from home.’” Jam packed Times Square on New Year’s Eve- no thanks. https://t.co/BfqwpfuRUm