The country's economy is in a downward spiral as the coronavirus continues to spread.

Oaxaca’s landmark Santo Domingo church and the former convent that houses the state’s largest museum have been cordoned off as part of pandemic mitigation measures.

Mexico is one of the hardest-hit countries by the coronavirus pandemic. It has the world’s third-highest death toll, and its curve has yet to bend.

As the coronavirus continues to spread, the economy is in a downward spiral. Mexican President Andrés Manuel López Obrador has not offered economic stimulus checks to citizens but has rebranded controversial infrastructure projects as jobs programs. Among them is the Trans-Isthmus Corridor.

The sweeping, multibillion-dollar project — criticized by many local Indigenous communities in its path — calls for the expansion of two ports on Mexico’s southern Pacific and Gulf coasts and connecting them with a railway to carry shipping containers. A highway is also slated to run parallel to the tracks. There’s also a plan to connect refineries on both coasts via a pipeline. Finally, the president intends to lure manufacturers to the area by creating 10, tax-favored industrial parks.

“Budget is not an issue. The resources are there. It’s just a question of getting the job done, despite the pandemic.”

“Budget is not an issue,” López Obrador said in a recent speech at Oaxaca’s Salina Cruz port, which he visited to supervise progress on its expansion. “The resources are there. It’s just a question of getting the job done, despite the pandemic.”

The port expansion is one of several ongoing projects that make up the Trans-Isthmus Corridor. The plan locally referred to as “the megaproject,” could totally reshape Oaxaca’s Isthmus region, a historic trading corridor, Indigenous heartland and home to one of the country’s most important biodiversity hot spots. As with the port project, the planned railway seeks to expand upon existing tracks. López Obrador cut the ribbon on the rail component in June, despite local pandemic restrictions on work and movement.

Related: As the coronavirus drags on, Mexico’s food prices soar

But the megaproject is underway as several government agencies have been hit by a presidential decree issued in April that has slashed their budgets by 75%. The cuts, framed as an emergency measure to respond to the pandemic, have gutted environmental, cultural, science and arts programs and government bodies for women and Indigenous peoples.

Left off off the chopping block are numerous big-ticket projects, including a new Mexico City airport, a massive oil refinery and a tourist train circuit in the Yucatán Peninsula. Critics point out that many of the contracts for the projects are going to foreign firms or companies linked to Mexico’s politically connected billionaires.

López Obrador compares the Trans-Isthmus Corridor to a Panama Canal across dry land. He is not the first president to float the idea for a corridor. A canal-style project has been proposed on and off since an 1859 treaty between the US and Mexico, which was never ratified but would have given the US authority over the strategic strip of land.

“This megaproject has a history,” said Bettina Cruz of the Oaxacan Assembly in Defense of Land and Territory, an Indigenous-led organization that opposes the Trans-Isthmus Corridor. 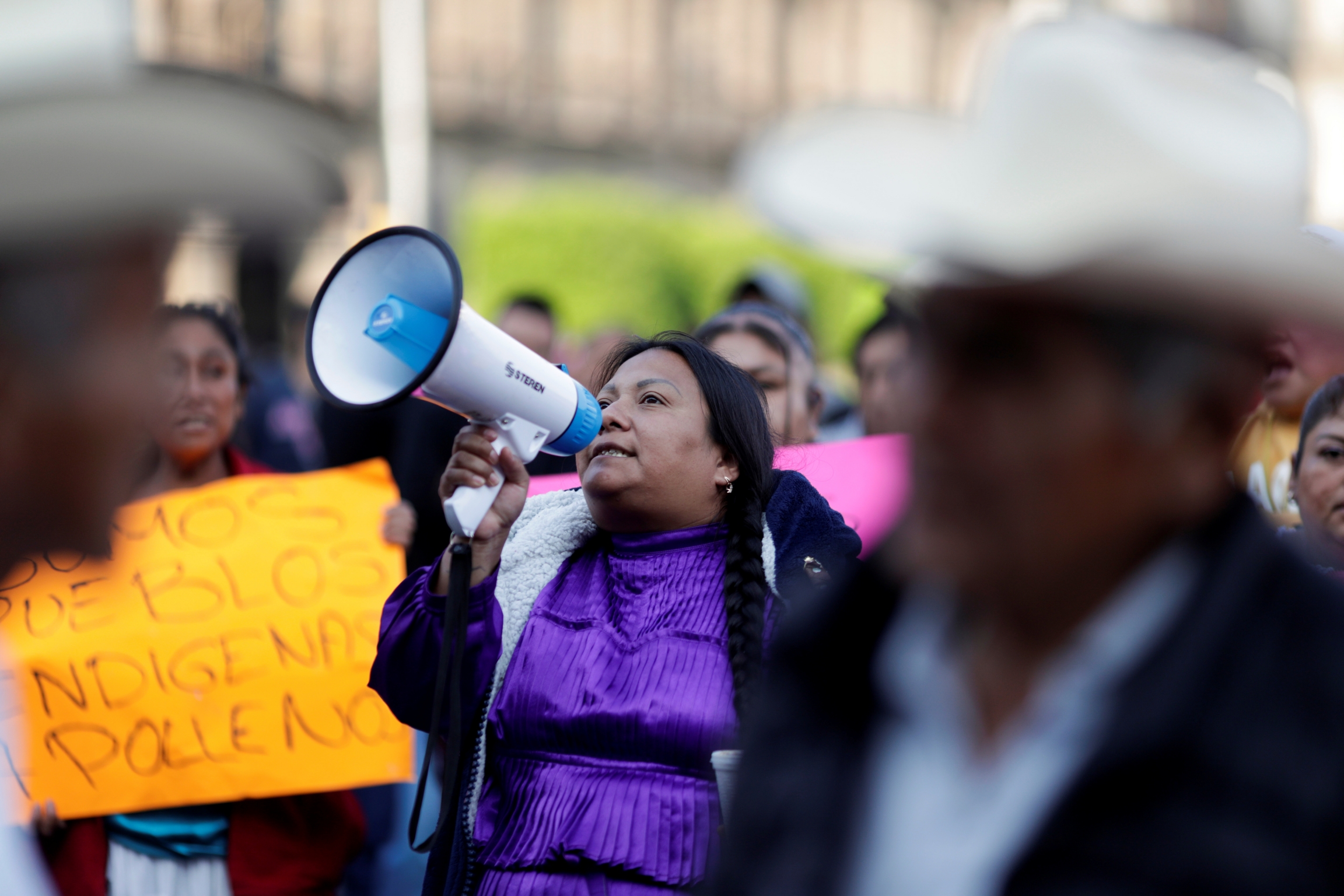 Oaxaca’s artisans take part in a protest outside the National Palace to demand the federal government help for the loss of jobs and decrease in their labor services, after the Mexican government declared a health emergency and issued stricter regulations to contain the spread of the coronavirus disease (COVID-19), in Mexico City, April 20, 2020.

Cruz’s group says the project will pillage resources, displace Indigenous populations and reduce residents to a source of cheap labor while corporations profit.

But organizing protests against it is tough during a pandemic. Mexico is approaching 50,000 government-acknowledged deaths from COVID-19. Oaxaca’s Isthmus region is under particularly strict lockdown measures due to the coronavirus, though construction on the corridor has been deemed essential work.

In addition, some view the megaproject as bringing economic stability to the region — which is hard to argue against at a time when the pandemic has battered Mexico’s economy. The latest push for it might succeed, especially because López Obrador has public support and an overwhelming majority in Congress.

This worries Cruz, who sees the Trans-Isthmus Corridor as connected to a larger network of megaprojects, including a hydroelectric dam project in Morelos, a new refinery in Tabasco and a tourist train circuit through Mayan lands in the Yucatán Peninsula.

The projects are an “attempt to reorder territory in the southern region [of Mexico] for the benefit of — and control by — global and US financial interests.”

Bettina Cruz, Oaxacan Assembly in Defense of Land and Territory

Viewed as a whole, the projects are an “attempt to reorder territory in the southern region [of Mexico] for the benefit of — and control by — global and US financial interests,” Cruz said.

López Obrador defends the project as a way to create thousands of jobs and close the economic gap between Mexico’s industrialized north and its cash-poor, agricultural south. He’s also in a hurry to get it done.

“We can’t commit the heinous mistake of leaving works incomplete,” he said during his visit to Salina Cruz. He wants the city’s port dredged and expanded within three years, before the end of his term in office.

“There shall be no pretexts of any kind — be they inclement weather or protests — that could lead to delays in the completion of these works,” he said.

Among them is the National Institute for Anthropology and History, or INAH, as it’s known by its Spanish acronym. It’s the guardian of Mexico’s ancient artifacts and cultural history — and it oversees Mexico’s world-famous pyramids and archaeological zones.

“It’s catastrophic,” Gilberto López y Rivas, a longtime anthropologist and researcher with the antiquities agency, said of the cuts.

Some fear weakening the INAH could lead to looting at ancient sites and fuel antiquities trafficking.

López Obrador’s administration rode to power in a historic landslide in 2018 on a wave of leftist, rhetorical rejection of the status quo. So, the cuts came as a shock to many.

“This has been the big surprise,” López y Rivas said. “Two years later, unfortunately — for the country and for those who believed 30 million votes would change the direction past administrations were heading — what we have is a continuation in the very essence of what these past administrations represented.”

He says the administration’s dual discourse — the president often slams neoliberalism and conservatives in speeches while advancing free-market policies — helps to explain the devastating cuts to national programs that safeguard ecosystems, protect Indigenous rights, and keep the country’s history and culture alive.

“It requires not having a memory,” he said of the mental shift needed to accept the administration’s vision for the region. “It’s an induced amnesia that goes against history, culture, identity and the idea of collectivism.”