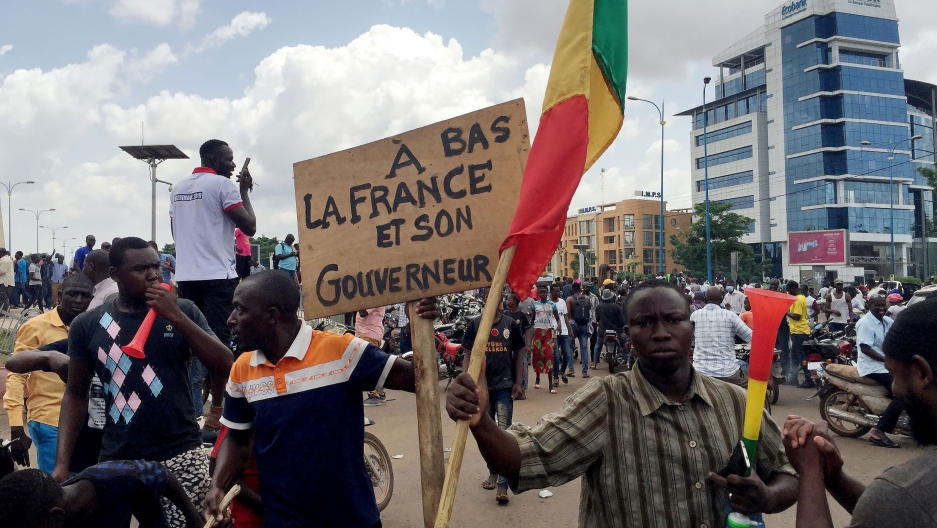 Opposition supporters react to the news of a mutiny of soldiers in the military base in Kati, outside the capital Bamako, at Independence Square in Bamako, Mali, Aug. 18, 2020. The sign reads: “Down with France and its governor.”

Soldiers who led a coup in Mali and ousted the country’s president and government promised on Wednesday to hold new elections.

President Ibrahim Boubacar Keita resigned and dissolved parliament on Tuesday, hours after the mutineers detained him at gunpoint, further destabilizing a country already in the grip of a jihadist insurgency and with a recent history of civil unrest.

As investors ditched shares in gold mining companies operating in the country while a sense of calm pervaded the capital Bamoko, it was still not clear early on Wednesday who was leading the revolt.

A spokesman for the mutineers, calling themselves the National Committee for the Salvation of the People, said they had acted to prevent Mali from falling further into chaos.

Colonel Ismael Wague invited Mali’s civil society and political movements to join them to create conditions for a political transition.

“Our country is sinking into chaos, anarchy and insecurity mostly due to the fault of the people who are in charge of its destiny,” he said while flanked by soldiers in a statement broadcast on state-owned television.

“We are not keen on power, but we are keen on the stability of the country, which will allow us to organise general elections to allow Mali to equip itself with strong institutions within the reasonable time limit.”

Related: Protesters in Mali call for president to step down

There was no immediate reaction to Wague’s offer from the opposition and leaders of recent protests, as the presidency of the G5 Sahel group of neighboring states called on Malians to resolve the crisis peacefully, and demanded the release of Keita and other senior officials.

On Wednesday, European Union Industry Commissioner Thierry Breton said the bloc would insist on new elections within a reasonable timeframe.

In a violent run-up to Tuesday’s coup following months of protests against alleged corruption, at least 14 people were killed last month in demonstrations called by a coalition Keita’s political opponents and activists.

Referring to ECOWAS’s inability to broker a solution during mediation efforts then, followed by its firm reaction to Tuesday’s events, a diplomatic source working in the region said he feared ECOWAS had “burned its bridges”.

“We need a negotiated solution. But who will negotiate with (the mutineers),” the source said.

Landlocked Mali has struggled to regain stability since a Tuareg uprising in 2012 which was hijacked by Islamist militants linked to al-Qaeda, and a subsequent coup in the capital plunged the country into chaos.

Late on Tuesday, anti-government protesters had poured into a central square in Bamako to cheer the mutineers as they drove through in military vehicles.

“I am against coups, but they become necessary if leaders are inflexible. What happened to IBK (Keita) was his own fault,” said 43-year-old motorcycle mechanic Namory Konate in central Bamako.

The capital was calmer on Wednesday, with people and traffic circulating as normal, although many shops, banks and public buildings remained closed amid evidence of overnight looting.

Videos circulating on social media showed Malians running unchecked through luxury compounds in the city, including properties identified by a Reuters correspondent as belonging to Justice Minister Kassoum Tapo and Keita’s son Karim.

Keita, 75, came to power in 2013 following the Bamako coup promising to bring peace and stability and fight corruption. He won reelection for a second five-year term in 2018.

In its first reaction to the coup on Tuesday, ECOWAS had also closed its member states’ borders with Mali, a measure that Ivory Coast said on Wednesday it had enforced.

Having previously warned it would no longer tolerate military coups in the region, ECOWAS plans to send a delegation to Mali to ensure a return to constitutional democracy.

Gold mining companies in Mali said they were operating as usual, while monitoring a deepening political crisis that hit their share prices on Wednesday.

Vincent Rouget, analyst at Control Risks Group, said the continued political uncertainty would “add to an already very high risk premium that people associate with Mali” and could pose risks for the country’s mining industry in the future.

The UN Security Council will be briefed on Mali behind closed-doors on Wednesday at the request of France and Niger, diplomats said.

UN Secretary-General Antonio Guterres had on Tuesday called for the immediate release of Keita and other detainees.