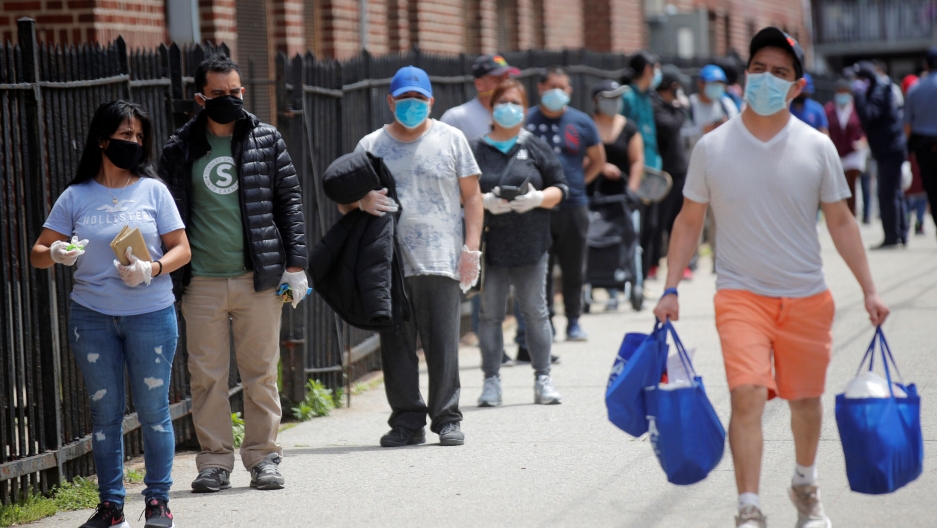 People wait in line at a food bank at St. Bartholomew Church, during the outbreak of the coronavirus disease (COVID-19) in the Elmhurst section of Queens, New York City, New York, May 15, 2020.

The US Commerce Department said retail sales, a significant portion of the economy, plunged 16.4% last month, the biggest decline since the government started tracking the figures in 1992. That data followed a historic 20.5 million job losses last month.

Germany’s economy slumped in the first quarter at its steepest rate since 2009 with worse expected by mid-year, but it is weathering fallout from the coronavirus better than other EU states where outbreaks have been more disruptive.

Indian lenders are facing a jump in virus-related defaults on credit card dues and personal and vehicle loans, forcing them to set aside hundreds of millions of dollars and take steps like asking sales staff to track down borrowers who have vanished.

These dramatic movements in the economy are happening all over the globe. Simon Cox is the emerging markets editor for The Economist. He spoke to The World’s Marco Werman from Hong Kong for the worldwide perspective on the economy.

Marco Werman: So, Simon, I guess there’s bad and then there’s really bad. How does this economic meltdown compare to the Great Recession back in 2008 or other downturns?

Simon Cox: It’s far worse. I mean, if you look at the global economy as a whole, it actually takes quite a lot to make it shrink. And back in the global financial crisis, which was this unprecedented depression-like event, it shrank, but only a very small amount. This pandemic, though, is going to produce a convulsion, the likes of which we haven’t seen since the Great Depression.

So, are we talking about the entire world being engulfed by this or are there some areas that are harder hit than others and will continue to be harder hit?

There’s almost nowhere that’s escaped. In Asia, Singapore has been very hard hit. It’s obviously a hub; it depends very much on people feeling free to move about. Thailand’s been very hard hit because of the tourism industry. Then, there are countries like Taiwan, and China itself that are going to come through it with actually less damage than some of their neighbors. Vietnam is another country that’s been damaged, but it’s less so.

Related: Is Vietnam the coronavirus-fighting champ of the world?

So, what makes a difference between countries that are better positioned to weather the economic storm? You mentioned Vietnam, like what went right there? What did they have that kind of shielded them?

So, it’s a combination of two things. First, it’s a fairly quick response to the pandemic itself. So, good public health response, including surveillance, tracking. Vietnam actually has quite a lot of experience in dealing with flus of various kinds. So, it was set up to sort of deal with this. It has high state capacity, to use the term. And then the second thing is a reasonably robust economic position at the beginning. So, countries that were able to respond to this slowdown with a fair amount of stimulus, perhaps because their fiscal situation wasn’t too stretched beforehand, perhaps their central banks had room to cut interest rates. Those things combined are what you really need to come through this with the minimum damage.

So, the US and China have been sparring, but that’s really been happening since President Donald Trump came into office. Trump has long talked about shifting production away from China. Do you think the pandemic could achieve what Trump so far has not been able to do? And what could the implications be for other countries in China’s orbit and in the kind of US-China orbit?

Yes, we have seen some of that. There is some sense supply chains are going to get shorter. An announcement just this week was that one of the big Taiwan semiconductor factories would set up a plant in the US. Now, that comes with some efficiency costs. It’s obviously more efficient to produce goods wherever they’re cheapest to produce. But I suppose for the populists and the people who are very keen to repatriate manufacturing, they see this, perhaps, as a good side of the pandemic.

From an economic standpoint, is this year a total write-off, and more focus is just going to be put on 2021? Or is it too soon to even focus on 2021?

It’s a little bit staggered. So, you know, the countries that got hit first are going to recover first. China being the most obvious example. So, for those countries that can hope to see some sort of recovery in the second half of this year. Everyone else is going to have to wait until 2021. And even then, it’s going to be a very qualified recovery. You know, we might get back to where we were in late 2019, but we’re never going to get back to where we would have been if this pandemic had never struck. And it’s important to bear that in mind, I think.

Related: The slow burn of a long-term slowdown

Finally, help us understand — why it seems that is the case, but markets globally are shaken, but not really stirred to the degree that a lot of fearmongers were predicting?

Yeah, no, that’s quite interesting. It’s partly because of the response of central banks. They’ve been very active, I think, commendably so, in trying to ensure financial stability. It’s also because financial markets are very forward-looking, so they’re pricing, not just this year’s earnings, not just next year’s earnings, but the next 20 years’ earnings. And over that kind of timescale, perhaps, the pandemic begins to look like a smaller event. And it’s also that clearly, it’s got a bit carried away. I think there was quite a lot of cash on the sidelines looking for buying opportunities. And the fear of missing out kicks in quite quickly once the sort of fear of losses subsides. And so, I think the rally got a bit ahead of itself. And we’re already seeing this week some pullback.

This interview has been edited and condensed for clarity. Reuters contributed reporting.