How to deal with a cyclone in the middle of a pandemic? 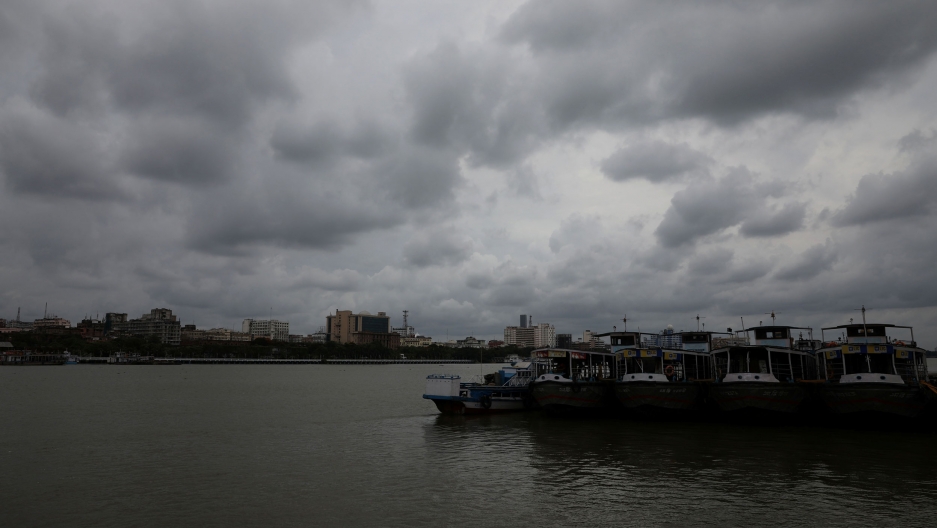 Clouds cover the skies over the river Ganges ahead of Cyclone Amphan, in Kolkata, India, May 19, 2020.

India and Bangladesh evacuated around half a million people out of the way of the most powerful storm in a decade ahead of its landfall on Wednesday amid fears of heavy damage to houses and crops and disruption of road, rail and power links.

The authorities’ task to save lives was complicated by ongoing efforts to curb the coronavirus pandemic and enforce social distancing to avoid a surge of infections. Many thousands of migrant workers are on the roads trying to get home from big cities after a nationwide lockdown destroyed their livelihoods.

Approaching from the Bay of Bengal, Cyclone Amphan was expected to hit the coast of eastern India and southern Bangladesh with winds roughly the equivalent of a Category 5 hurricane.

The Indian weather department forecast a storm surge of 10- to 16-foot waves — as high as a two-story house — that could swamp mud dwellings along the coast, uproot communication towers and inundate roads and rail tracks.

There will be extensive damage to standing crops and plantations in the states of West Bengal and Odisha while large boats and ships could get torn from their moorings, the weather service said in a bulletin late on Tuesday.

Samarendra Karmakar is a retired director of Bangladesh’s Meteorological Department. He spoke with the World’s host Marco Werman from Bangladesh’s capital, Dhaka.

Marco Werman: What can you tell us about this storm?

Samarendra Karmakar: It is already weakened slightly in the afternoon, late afternoon, with sustained wind speed of about 200 kilometers [and it] may weaken a little more during landfall.

So, you’re looking at wind speeds now between 120-150, but expecting some weakening. The people most at risk to the severe flooding live in coastal cities. They live in mud and wooden shacks. Where is the government evacuating these people to? Are there shelters? And are they adequate?

I think the government is making a lot of preparations. They are making these shelters ready. They have increased the number of shelters because the schools are now closed because of the coronavirus. So, that will be useful. And the volunteers of the cyclone preparedness program — they are already in the coastal areas and requesting the people to take shelter in the cyclone shelters. That is what I have seen from the news.

So, among the people in very basic shacks are about a million Rohingya refugees who fled the ethnically driven massacres in Myanmar a few years ago. And they’ve been living in this giant refugee camp, Cox’s Bazar in Bangladesh. What do you know about their situation? Do they have enough space to relocate?

I think the Cox’s Bazar region will be a less impacted area because it is likely to make landfall to the west and southwest — that is, in India and Bangladesh border area. So, the coastal area of Cox’s Bazar and Chittagong, I think that it will be less affected. So, the Rohingya people who are in the tents, I think they will not be impacted so much, but there will be some thunderstorms or rainfall or something like that, what is usual during this time.

I’ve read that across Bangladesh, some people are hesitant to evacuate. Why do you think that is?

It happens always. In our country or in other countries also; what I have seen is that people don’t like to go to the shelters sometimes. And there are many reasons for this. And this year, you know, the coronavirus is a new addition; it is a new issue. And they may think that the social distance will not be maintained properly — that may also create a problem among them this year. But the government has requested that the people do use masks and increase the number of shelters for managing some social distance among the people.

Related: A climate migration crisis is escalating in Bangladesh

I just learned today that about 40% of global storm surges hit Bangladesh. In fact, some of the deadliest cyclones have hit Bangladesh in the past half-century. As you say, now, there’s the coronavirus. How prepared do you think Bangladesh really is for the effects of this storm?

The people are now [aware] than before. So, this is my thinking that people will be going to the shelter and also take precautions in this case.

This interview has been edited and condensed for clarity. Reuters contributed reporting.