Two longtime paid contributors have decided to call it quits with Fox News. Both were outraged by the network’s “irresponsible” hosts and a controversial new documentary about the aftermath of the storming of the US Capitol.

Steve Hayes and Jonah Goldberg, who joined Fox News in 2009 as regular contributors, announced they have cut ties with the network on Sunday.

“Fox News still does real reporting, and there are still responsible conservatives providing valuable opinion and analysis. But the voices of the responsible are being drowned out by the irresponsible,” the authors wrote in online magazine the Dispatch, which they co-founded in 2019. 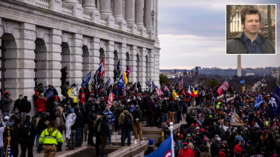 The writers pointed to ‘Patriot Purge,’ Tucker Carlson’s three-part special, which criticized the government for launching “one of the largest manhunts in history” in response to the storming of the US Capitol by Donald Trump supporters in January. They called the special “a collection of incoherent conspiracy-mongering, riddled with factual inaccuracies, half-truths, deceptive imagery, and damning omissions.”

In their statement on Dispatch, Hayes and Goldberg said some of Fox’s top opinion hosts “amplified the false claims and bizarre narratives of Donald Trump or offered up their own in his service.” Fox News declined to comment on the matter to The New York Times.

On January 6, Trump supporters broke through police barricades and briefly overran the Capitol in an effort to stop Congress from certifying Joe Biden’s win in the 2020 presidential election. One rioter was fatally shot by police and several more people died on the Capitol’s premises from health emergencies.

Authorities subsequently arrested nearly 700 people in relation to the riot, including prominent Trump supporter Jacob Chansley, known online as the ‘QAnon Shaman,’ who this week was sentenced to 41 months in prison.