US Climate Envoy John Kerry has slammed the idea of spending trillions of dollars on fossil fuel subsidies while countries try to transition to green energy, calling it the “definition of insanity.”

Speaking after the release of a draft agreement at the COP26 climate summit in Glasgow on Friday, Kerry criticized the level of assistance offered to the fossil fuel industry in recent years, blasting its continued support as “the definition of insanity.”

Kerry said such subsidies “have to go” if nations are going to meet their climate goals as set out at COP21, six years ago. 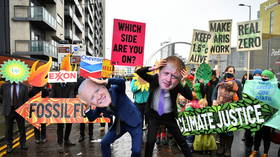 The wording in the COP26 draft agreement urges signatories to speed up “the phase-out of unabated coal power and of inefficient subsidies for fossil fuels.”

“That language must stay,” Kerry said, adding that the text was not about phasing out all coal, but unabated coal.

The language in the agreement was watered down from a more stringent original version, although it was still praised for how it calls for action on one area driving the climate crisis.

Debate is ongoing at the Glasgow summit as nations race to agree a deal before the conference ends on Friday. Responding to the draft text, a representative of Grenada warned the coming hours will “determine the new dawn.”

“If the text withstands the battering it may get, we are holding onto 1.5C by our fingernails,” Grenada’s climate resilience minister, Simon Stiell, said.