“Florida is leading,” DeSantis told reporters on Thursday. “This is the strongest piece of legislation that’s been enacted anywhere in the country in this regard.”

The package of bills signed by DeSantis marked the governor’s latest pushback against President Joe Biden, who announced an executive order in September requiring large employers to force their workers to get vaccinated against Covid-19. DeSantis, who earlier this month mocked the president by referring to the “Brandon administration” – alluding to the anti-Biden ‘Let’s Go Brandon’ chants – got another apparent dig in on Thursday by signing the new legislation at a car dealership in Brandon, Florida. 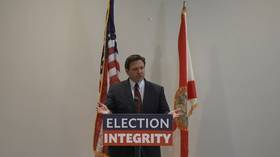 Asked by a reporter whether his choice of venue was meant to troll Biden, DeSantis said, “I think that Brandon is a great American city. I think the people here are fantastic.” He added, “We’re proud to make a stand for freedom in Brandon, Florida.”

Shouts of “Let’s Go Brandon!” erupted from the crowd of people attending the signing ceremony.

The bills were passed by state lawmakers on Wednesday at a special session that DeSantis convened to ensure that Floridians don’t lose their jobs for refusing compulsory inoculations. One of the bills bans private employers from mandating vaccines unless they allow exemptions for medical reasons, religious beliefs, pregnancy or natural immunity gained from previous Covid-19 infections.

Workers also can choose to undergo periodic testing to prove that they don’t have Covid-19, at the employer’s expense. Businesses that fire employees for refusing to be jabbed and fail to offer the required exemptions can be fined as much as $50,000 per violation.

The legislation also prohibits vaccine mandates by government agencies and blocks schools from imposing jab requirements on students. Schools are barred, too, from forcing students to wear masks or requiring healthy students to quarantine, and parents may sue districts that violate the new law.

“I told Floridians that we would protect their jobs, and today we made that the law,” DeSantis said. “Nobody should lose their job due to heavy-handed Covid mandates, and we had a responsibility to protect the livelihoods of the people of Florida.”

Biden’s mandate order also faces a raft of court challenges. His administration has suspended implementation and enforcement of the order after a federal appeals court temporarily blocked the mandate requirement and called it “staggeringly overbroad” and “fatally flawed.”

DeSantis is among the frontrunners for the Republican presidential nomination in 2024. State Representative Angie Nixon, a Jacksonville Democrat, said the special legislative session was about boosting the governor’s political profile. “We’re here just to kick off the governor’s campaign,” she said on Wednesday in a Twitter post.

Ron DeSantis and the republican leadership just wasted hundreds of thousands of dollars on this special session. We didn’t even attempt to address this housing crisis affecting many in our state. We’re here just to kick off the governor’s campaign. #politicalcircus