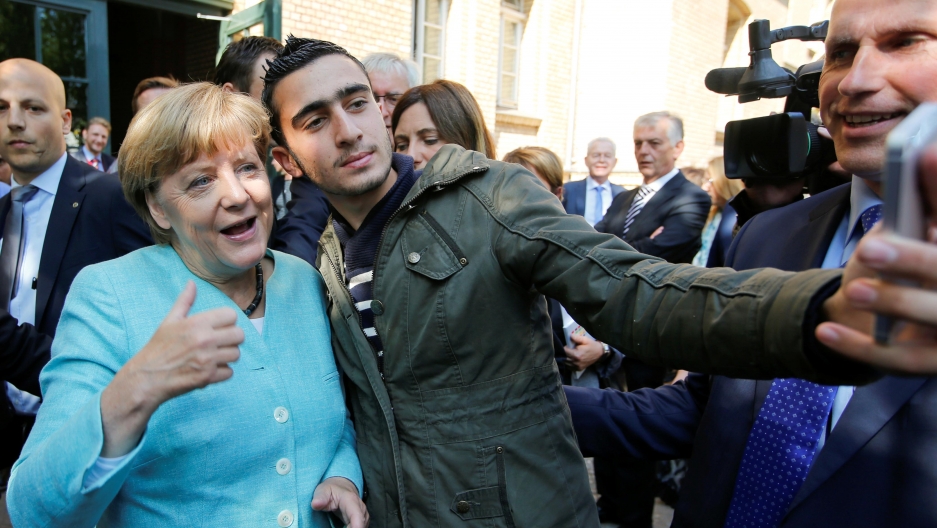 Syrian refugee Anas Modamani takes a selfie with German Chancellor Angela Merkel outside a refugee camp near the Federal Office for Migration and Refugees after registration at Berlin’s Spandau district, Germany, on September 10, 2015.

In 2015, hundreds of thousands of people were on the move from Africa, Asia and the Middle East, fleeing war-torn countries such as Syria and turning to Europe as they sought safer and more stable futures.

Germany took in more than 1.7 million asylum-seekers that year. And five years ago today, German chancellor Angela Merkel made what would become a famous speech in which she reiterated that migrants and refugees were welcome in Germany.

“I’ll put it simply: Germany is a strong country…we can do this,” she said.

Critics said this statement, which triggered a groundswell of xenophobia, would be her undoing. They argued it would open the door to terrorism, right-wing extremism in politics, and general divisions within the German population and Europe overall.

Five years later, critics’ worst predictions have not come to pass. And while Merkel’s popularity took a hit, it has risen again throughout the pandemic.

The World’s host Carol Hills checked in on what’s happened to Merkel and the so-called “migrant crisis” with Constanze Stelzenmüller, a senior fellow at the Brookings Institution who focuses on German and European foreign policy.

Carol Hills: Constanze, bring us back to 2015, when Merkel made that statement. What was the situation at the time in terms of the migrant crisis?

Constanze Stelzenmüller: I was mesmerized by what seemed like an absolutely historical immigration challenge for Germany and mesmerized also by the generosity of the response. And I don’t just mean the chancellor’s memorable words — for which, of course, she was castigated — but I realized that many of my friends and acquaintances were trying to help out. This was people who had 24/7 jobs in national policymaking who were volunteering in refugee shelters, to the 82-year-old mother of a friend of mine, a retired gynecologist in the former eastern Germany, who said to her son, “Well, somebody is going to have to take care of these ladies,” and reinserted herself into the workforce. So there was a general atmosphere of people rolling up their sleeves and saying, “Let’s try and get to grips with it.” But it did, of course, become apparent that there were real problems with us as well.

So what was the backlash, and how did Merkel respond?

There was reasonable criticism by many, it has to be said, that, while, German civil society was responding in the sort of energetic and cheerful ways that I’ve just described, German government institutions seem to be much more overwhelmed, seemed to be faltering in addressing this challenge. And this gave a completely new breath of energy and malignant force to Germany’s populist parties, in particular the Alternative for Germany, a relatively small, mildly Eurosceptic party that had been formed in 2013 and that suddenly ramped up everywhere, based on really viciously xenophobic and ethno-nationalist messaging. There was a sudden and very serious groundswell of anger against Chancellor Merkel. There was a movement on the right wing of her Christian Democratic Party called MMW for short — Merkel Muss Weg, or Merkel Must Go — and for a while, it seemed as though that was going to muster a very serious challenge to her authority.

How did she respond?

Well, famously, she said, if we can’t accept that we are large and wealthy enough to handle this kind of a refugee influx, then this is no longer my country. That angered many, many people. And the truth is, five years later, we’re seeing that the worst of the predictions have not come to pass. We have not had significant foreign radical terrorist attacks. We have seen some immigrant crime, but my understanding is that immigrant crime numbers are below the domestic crime numbers. There are actually a great number of success stories. In other words, the integration of those who were eligible to stay because there were genuine political refugees, I think, is now a more or less unqualified success.

Since 2015, how did Merkel’s approach to admitting asylum-seekers change?

Interestingly, Merkel, who is a very canny, shrewd political operator, stuck to her guns saying, we can do this and we should not change our rules or close our borders. De facto, that is exactly what we did. The border closings really happened all across Europe and then Merkel negotiated a bilateral treaty with Turkey that amounted to a promise by Turkey to keep the bulk of Middle Eastern refugees in Turkey in exchange for billions of euros in economic support. So far, it seems to have worked, and the influx of new migration to Europe and Germany is much much lower than it was five years ago. Obviously, that also has something to do with the pandemic.

Five years on, Angela Merkel won’t be seeking another term. She’s likely to be stepping down in 2021. How is she viewed in Germany today? Broadly, is she admired or just sort of tolerated? What’s the general sense of her?

Merkel’s popularity went down in national polls when it became clear that this influx of a million or more refugees in 2015 would be much more difficult than everybody thought at the beginning. Now, five years later, we’re in the middle of a pandemic but Merkel’s popularity is greater than it’s ever been. It’s really interesting. I think that she will go out on a very high note. And by the way, she has said that she is not running again in 2021, and I think we have every reason to believe her. She is not needy, unlike many other politicians, and I think she will calmly go into the sunset.