Top White House Covid adviser Anthony Fauci insisted his long career as a federal bureaucrat is far from over, saying retirement is simply out of the question as he looks to wrap up “unfinished business” in the world of medicine.

Asked whether he is thinking of leaving his long-held leadership post at the National Institute of Allergy and Infectious Diseases (NIAID), the 80-year-old health official said he’s “not even remotely contemplating that right now.”

“There’s a lot of unfinished business right now, so I’m not even thinking about walking away,” Fauci told Reuters in an interview on Tuesday, adding that he would like to see the end of the coronavirus pandemic, and even further progress on eradicating HIV and AIDS, before he steps away from his work. 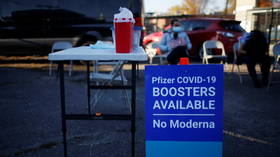 The White House adviser also reiterated calls for the “overwhelming majority” of fully-vaccinated American adults to receive booster shots, noting that the additional dose could eventually become standard in defining what it means to be ‘fully’ immunized.

“Right now, officially, fully vaccinated equals two shots of the mRNA and one shot of the J&J, but without a doubt that could change. That’s on the table for discussion,” he said, referring to Pfizer and Moderna’s vaccines which use messenger-RNA, and Johnson & Johnson’s one-dose formulation.

While an FDA advisory panel initially voted overwhelmingly against booster doses for all healthy Americans – instead greenlighting additional shots only for the elderly and certain at-risk groups – the FDA itself decided to cut the panel out of the process entirely and authorized boosters on its own last week. A similar panel with the Centers for Disease Control and Prevention (CDC), however, did give its blessing, with CDC Director Rochelle Walensky quickly signing off on the decision.

With universal boosters effectively authorized, all adults who received their initial two-dose round of the Pfizer or Moderna immunizations are now encouraged to take another dose within six months of their last shot. So far, an estimated 33 million Americans have received a booster.