The US Justice Department (DOJ) has agreed a settlement that will see the government pay a reported $127.5 million to victims and survivors of the Parkland school shooting, over its failure to investigate tips about the attacker.

In a joint court filing on Monday, lawyers representing families of those killed and injured during the mass shooting at Marjory Stoneman Douglas High School in Parkland, Florida in 2018 confirmed that a financial settlement had been reached with the US government. Although they did not specify the figures involved, according to the Associated Press, the DOJ has agreed to pay out some $127.5 million. 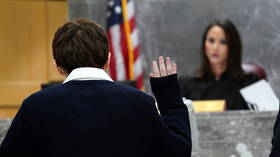 The settlement centers around the FBI’s failure to properly investigate two tips about the gunman, which the victims’ families claim could have prevented the tragedy.

“Although no resolution could ever restore what the Parkland families lost, this settlement marks an important step toward justice,” Kristina Infante, lead attorney for the families of the victims, said in a statement after the deal was reached.

One of the warnings provided to the FBI came about a month before the shooting, when a woman contacted the agency’s tip line saying she feared that a former student of Marjory Stoneman Douglas, Nikolas Cruz, had armed himself and intended to “slip into a school and start shooting the place up.”

Another tip-off cited a YouTube comment from a user under the name of ‘nikolas cruz’ who claimed they were going to become “a professional school shooter.”

The FBI previously accepted that it received the two tips but failed to act on them.

Seventeen people were killed and a further 17 wounded in the school shooting on February 14, 2018. Cruz, who had been expelled from the school before the incident, pleaded guilty last month to multiple counts of first-degree murder and attempted murder.

Prosecutors have said they will seek the death penalty against Cruz, although his legal team is hoping he will be able to avoid that fate when the penalty phase of the trial begins next year.