A New York ethics board has rescinded its approval of former Governor Andrew Cuomo’s pandemic memoir, saying he violated his pledge not to tap state resources to complete the book.

The Joint Commission on Public Ethics (JCOPE) voted 12-1 on Tuesday to rescind its decision to approve the then-governor’s 2020 book, concluding that Cuomo got approval based on false pretenses. He will likely need to reapply for the board’s approval, and if that bid is rejected, he could be forced to surrender some or all of the $5.12 million that he reportedly made from the memoir. 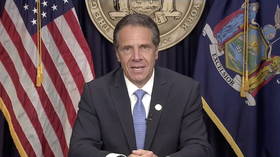 Misdemeanor complaint in ‘sex crime’ case against Andrew Cuomo filed in NY court, likely to be charged with ‘forcible touching’

“Contrary to the representations made on behalf of Governor Cuomo and not disclosed to the commission, state property, resources, and personnel, including staff volunteers, were used in connection with the preparation, writing, editing, and publication of the book,” the ethics board said in its resolution.

The commission said it also was misled about the book’s subject matter, financial details of Cuomo’s publishing contract, and the status of work on the tome.

Entitled ‘American Crisis: Leadership Lessons from the Covid-19 Pandemic’, the book was ridiculed by critics when news of the project surfaced in August 2020. Many pointed out that New York had the nation’s highest death toll from the virus and that Cuomo’s policies caused thousands of deaths in nursing homes. Fewer than 50,000 copies had been sold as of last August.

Just 71 copies were reportedly sold in the last week of July, days before Cuomo resigned as governor amid accusations of sexual misconduct against at least 11 women. His previous memoir also undersold, with only 3,200 copies being sold in the two and a half years after it was published in 2014. That fell far short of expectations for his publisher, which had reportedly ordered 200,000 copies printed.

Rich Azzopardi, a spokesman for Cuomo, accused Governor Kathy Hochul and other New York politicians of orchestrating the ethics commission’s ruling. “These JCOPE members are acting outside the scope of their authority and are carrying the water of politicians who appointed them,” Azzopardi said. “It is the height of hypocrisy for Hochul and the legislature’s appointees to take this position, given that these elected officials routinely use their own staff for political and personal assistance on their own time.”

Revoking a previous approval means that a JCOPE ruling “cannot be relied on by anyone and is subject to political winds,” Cuomo’s spokesman added. He said the state staffers who were involved in the book project did their work on a volunteer basis, on their own time.