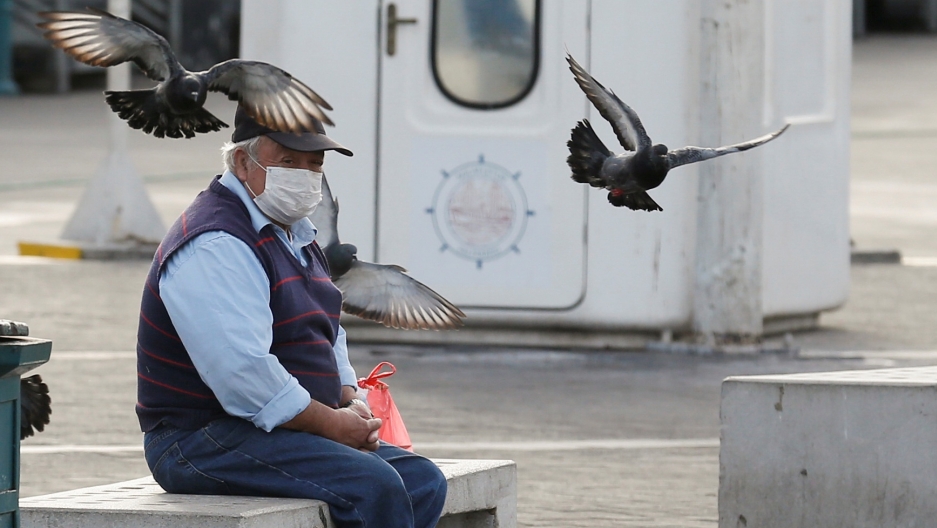 A man wearing a protective face mask as a precaution against the spread of the coronavirus disease (COVID-19) rests in a public square in Valparaiso, Chile, April 27, 2020.

Chile is one of several countries trying to plan ahead for a return to normalcy amid the COVID-19 pandemic.

Its health ministry has pushed for the use of so-called “immunity passports” — an all-clear card of sorts issued to people who have already had the illness — so that parts of the population can return to work.

Related: Countries herald lifting of coronavirus lockdowns, but UK says not yet

But scientists, doctors and researchers still lack much information about the coronavirus and how it works. Experts with the World Health Organization worry about moving too quickly and have advised against the use of such passport documentation to indicate immunity from COVID-19.

Paula Daza, sub-secretary of Chile’s health ministry, told reporters on Sunday that while many uncertainties remain about the coronavirus pandemic, evidence points to a reduced risk after the first bout of the coronavirus.

“One of the things we know is that a person who has…lived through the disease is less likely to become ill again,” Daza said. She said certifying this status was the “goal of the COVID-19 card that is being prepared will soon be delivered” to patients.

WHO said that issuing certificates could inspire false confidence and increase the risk of spreading the virus. People who have recovered may ignore advice about taking precautions against the virus, the WHO said.

“There is currently no evidence that people who have recovered from COVID-19 and have antibodies are protected from a second infection,” said WHO.

Daza clarified on Sunday that the certificates Chile planned to issue did not certify immunity.

“It is very important, and I want to reiterate, that we have not talked about an immunity card,” she said.

But Chile’s top health official, Jaime Manalich, said early in April that those who have recovered from the coronavirus represented a population that was immune to it and incapable of transmitting it.

He said those with the medical discharge certificate would be “freed from all types of quarantine or restriction, specifically because they can help their communities enormously since they pose no risk.”

Daza did not specifically address the contradiction when asked by a reporter Sunday.

Chile has confirmed 14,885 cases of coronavirus since the outbreak began in the South American nation in early March, as well as 216 deaths.

Related: Kids in Spain venture outside for first time in weeks

Dr. Cristóbal Cuadrado is a professor of public health at the University of Chile who joined host Marco Werman from Santiago to discuss the idea behind the immunity passport concept — and why it sparked so much controversy.

Marco Werman: Dr. Cuadrado, can you tell us what Chile has decided with regard to the immunity passports?

Dr. Cristóbal Cuadrado: There has been a lot of controversy regarding this issue in the last weeks. At the beginning, the Ministry of Health wanted to give this kind of immunity passport to any person that had acquired the disease in the last two weeks. So, any person that has been diagnosed and cleared from the disease was suspected to be immune, and therefore, given this kind of passport. Additionally, there was a discussion into if antibody testing should be added to the definition.

But the problem, as World Health Organization has mentioned, is that we don’t know if this rapid testing available now in the market really is able to detect effective antibodies on how long this potential immunity could last. So, I think there is a lot of controversy at this point in Chile, and also in other countries that are looking forward to move on these kinds of measures.

Right, and depending on how you feel about this idea, I suspect you may or may not agree with even whether to call it an “immunity passport.” The WHO has recommended against them because there is no evidence currently supporting immunity. The idea that if you’ve been infected once that you can’t be reinfected — we just don’t know. So, has the Chilean government addressed these concerns in any way?

The use of this documentation is not clear any longer because the initial idea of the government was to produce this documentation so people could move freely and not be forced to stay at home, for example, when quarantines were in place in some cities. But just recently, a few days ago, they needed to step back on this and they stopped calling this an immunity passport. So, this is still something that is ongoing and probably we will hear from the Chilean government in the next week, how they are going to or plan to use this documentation if it’s not aiming to warrant immunity to the persons that are holding it.

So in a matter of a few weeks, the Chilean government contradicted itself on this. What kind of reaction has there been to the plan so far?

In the media, it has been very clear that there were profound differences with the ministry of health. For example, the Chilean Society of Immunology or the Chilean Society of Infectology were both calling for prudence on the implementation of these measures in the context of uncertainty of the evidence. And I think the message from the World Health Organization during the last week was also very, very influential for the decision of the government to step back on this decision.

Will it give people false confidence when we just don’t have full details on immunity to COVID-19?

Yeah, absolutely. I think that one of the main criticisms of this idea of the immunity passport is not to be transparent in the uncertainties behind the idea. So, I think you can implement something like this, but you need to be very, very transparent to the public. What we do know and what we don’t know. I think that is, of course, a point of contention, because the economy needs to start working again. But we need to do it in a way that we protect the population’s health as well.

This interview has been edited and condensed for clarity. Reuters contributed to this report.