Monday marked the second day in a row that America’s most populated state broke its own record on gas prices, according to data from the American Automobile Association (AAA). On Sunday, gas prices were averaging $4.67, besting a previous record set in October 2002.

The national average for gas per gallon stands at $3.41 as of Monday – a figure that continues to rise as Americans face the effects of inflation and supply chain issues in numerous industries.

President Joe Biden has chalked up inflation issues to a rise in demand, as well as Covid-19 pandemic disruptions. In a Sunday tweet, he claimed prices are too high for Americans, but also added without elaborating that the country is also in the middle of a “historic economic recovery.” Biden claimed that his massive spending package, Build Back Better, will help address inflation issues. 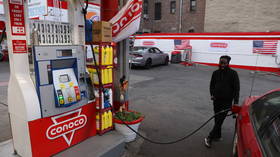 Critics have pointed to the administration’s economic shutdowns and moves to limit drilling as factors driving the staggering prices Americans are paying at the pump, like a recent plan to reportedly block drilling in New Mexico near the Chaco Canyon National Historical Park.

AAA has also noted that heavy rainstorms in Northern California have slowed the production capacity of refineries and helped in the recent spikes in prices at the pump. However, spokesperson for AAA Doug Shupe told CNN that the dramatic price hikes are far steeper than people have seen in recent memory.

“The person who has the typical midsize sedan with a 14 gallon size fuel tank, they’re paying $21 more to fill up that tank today than last year,” Shupe said, noting that Americans are paying about $1.50 more per gallon, compared to last year before Biden took office.

At a recent press conference, White House Press Secretary Jen Psaki claimed higher gas prices are due to “fluctuations” in the industry, as well as companies’ inability to meet consumer demand. This, she added, is all the more reason to “double down” on investments in “clean energy options.”