A group of businesses has followed Republican states in suing the Biden administration over its private-sector vaccine mandate. They claim that the “unconstitutional” mandate will result in lost jobs and empty shelves.

The coalition of businesses, which includes staffing companies, restaurant groups and religious organizations, urged the Fifth Circuit Court of Appeals on Tuesday to permanently block the vaccine mandate, which requires firms with more than 100 employees to force their staff to get vaccinated against Covid-19 or submit to regular testing, with fines of up to $136,000 for noncompliance. 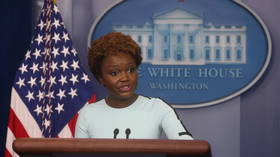 The businesses argue that if forced to lay off unvaccinated staff and spend money setting up human resources systems to monitor vaccine status and collect test results, “companies will not be able to hire the workers they need and will lose sales and customers because they cannot stock their shelves.”

The Biden administration’s mandate was issued through the Department of Labor’s Occupational Health and Safety Administration (OSHA), an organization that the businesses say has no power to issue such a mandate. To bolster their case, the businesses pointed to a recent Supreme Court ruling that the administration’s eviction moratorium – issued by the Centers for Disease Control and Prevention (CDC) was unconstitutional.

“The Occupational Health and Safety Administration (OSHA) is no more the nation’s public health agency than the CDC is the nation’s housing regulator,” their filing read. “Sweeping authority must come, if at all, from Congress.”

The businesses are joined in their lawsuit by the states of Texas, Louisiana, Mississippi, South Carolina and Utah. Multiple other Republican-run states and their governors have filed similar lawsuits since Biden announced last week that the mandate would come into effect from January.

Despite a federal appeals court temporarily freezing the mandate pending the onslaught of litigation, the White House has told employers to ignore the court’s order and “move forward” on implementing it regardless.