US President Joe Biden’s newly-built helicopter has been grounded after a Pentagon test failure, and there is no certainty on when or if its issues can be fixed.

Biden’s first flight on the chopper, built by Lockheed Martin Corp., was delayed after testing found it to be not “operationally suitable” and unreliable for emergency situations, according to Bloomberg.

The $217 million VH-92 helicopter is part of a $5 billion program replacing vehicles used by the president and other officials, but an unnamed source told Bloomberg there was no timeline for when or if the grounded helicopter will be operational. 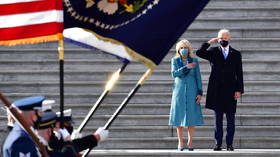 The piece of equipment did meet the required standards during September testing when it was determined it was “operationally effective” and could safely transport the president to locations like Camp David. It was, however, not cleared for emergency flights due to technical issues, like a delay in the communications systems.

“Engine exhaust and fluid discharge” have also caused problems, according to the test, as it limits available landing sites for the helicopter.

The presidential helicopter was previously supposed to be ready for missions in July, a date that was already pushed back by a year.