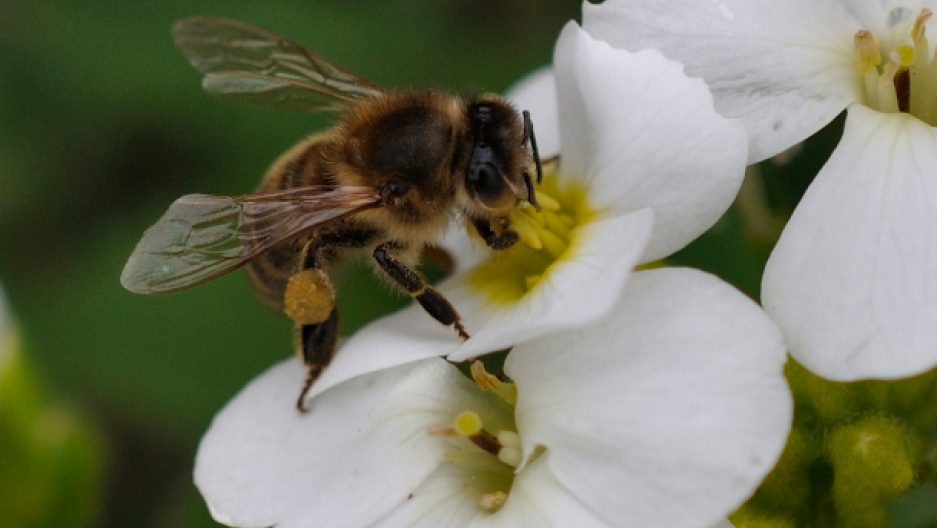 Author Brigit Strawbridge Howard re-discovered her joy in nature by watching and listening to bees.

The innate curiosity about the natural world that many of us experience as children is often lost on the path to adulthood. Author Brigit Strawbridge Howard found her way back to a childlike fascination with nature with the help of some of the world’s most important pollinators: honeybees, bumblebees, and oft-overlooked solitary bees.

In her book “Dancing with Bees: a Journey Back to Nature” Howard describes how she learned to notice the world around her by paying special attention to the bees that buzzed right through her garden and into her heart. On her journey, she learned a lot about bees — more, she says, than she ever could have learned just by reading about them.

Related: Most bees are solitary animals, and 4 other surprising bee facts

“Social insects have a queen and they have sometimes tens of thousands of workers in a colony, and they have males, and there is a division of labor,” Howard explains. “But there’s also cooperative care of the young. That doesn’t happen with solitary bees, and the majority of the bees on this planet are solitary.”

Honeybees are the only kind of bee that makes honey. Bumblebees collect nectar and store nectar to feed their young, but “they’re not alchemists like honeybees,” Howard says. “They don’t turn it into honey.”

Howard finds the solitary bees the most fascinating, mostly because of their nesting behavior.

Solitary bees are opportunists, Howard says: They seek out and nest in existing cavities anywhere they can find them — such as in a wall, for example. They also like man-made nesting tubes made out of cardboard or bamboo.

Once they’ve mated, the males have “absolutely nothing to do with the rearing of the brood,” Howard explains. Each individual female sets about searching for a place to lay her eggs. In her short life, a female bee will lay about 20 to 30 eggs.

Suppose a female bee chooses a bamboo tube in your backyard to nest in. The first thing she’ll do is block off the back of the tube with a bit of mud, which she has mined. “That’s why she’s called a mason bee,” Howard adds. Then the female bee goes out over and over agin to collect pollen and bring it to the nest.

Related: Flowers give off electrical signals to bees

She drops each bit of pollen into the back of the nesting tube. When she’s collected enough, she taps it all into place and lays an egg on top of the pollen. Once she has laid that egg, she collects more mud and blocks that little cell off. Then more pollen, another egg and another bit of mud and so on. She repeats this until she has filled the tube to its entrance, and when she’s done, she blocks it off with a plug of mud to seal the tube closed.

“The other thing she does, which is incredibly clever, is she lays female eggs at the back of the tube and male eggs at the front,” Howard says. This is because birds often prey upon these nests and eat the larvae, and it’s better for the survival of the species that the males get eaten and not the females.

Howard has watched other types of bee behavior with fascination, including a highly specialized technique called sonication. Only bumblebees and a few types of solitary bees do this, Howard says.

She was sitting in her garden listening to bees and heard an unusually high-pitched buzzing. She thought perhaps a bee had gotten caught in a spider’s web or something, because it sounded “really alarmed.”

“I followed the sound of the buzz, and I found this bee inside a poppy and she was going round and round and round inside the poppy, having a pollen bath,” she says. “So I listened and watched and in time I realized that the bees, when they came to the poppies, always made that noise.”

“It turned out that those bees were buzz foraging, or sonicating,” Howard explains. “They wrap themselves around the flower and then they disconnect the flight muscles inside their thorax, but they continue to vibrate. So they’re vibrating the indirect flight muscles twice as fast as they would if they were flying. [This] causes the plant to literally explode out its pollen.”

Bee populations, like many other kinds of insects, are in sharp decline, primarily due to habitat loss and climate change. But, “everybody can do something to help bees.”

Bee populations, like many other kinds of insects, are in sharp decline, primarily due to habitat loss and climate change. But “everybody can do something to help bees,” Howard says.

Related: Why dying bees may cause a public health problem

“For starters, if you have access to growing space, a back garden, a back yard, or a larger piece of land, [plant] a large variety of plants that are rich in pollen and nectar,” Howard says. “We need to increase diversity. We need flowers of different sizes, as well. Flowers for long-tongued bees and short-tongued bees, flowers with flatheads, flowers with bells, tubes, cups — a huge variety of flower shapes.”

“Stop using pesticides. Find alternatives,” she continues. “Once you stop using the insecticide, a whole host of beneficial insects move in and they take care of the pests for you.”

“One of the most beautiful things we can do — and maybe this is where I would start — is get out in your backyard or your garden or your plot and look and notice and watch and observe and get to know the insects that you already have there,” she advises. “[I]f you start to take time to watch, it’s very difficult not to start falling in love with them, and when that happens, you start to look more deeply into causes of their decline and you tend to want to do more to help them.”

As for her quest to reconnect with nature, Howard says she has it back “way beyond anything I have ever experienced, even as a child, I think.”

“I have the awe and wonder that had been lost. I tread more carefully everywhere I go. … I’m a lot more respectful. I’m more grateful. And I give back now.”

“I have the awe and wonder that had been lost,” she says. “I tread more carefully everywhere I go. … I’m a lot more respectful. I’m more grateful. And I give back now. As children, you’re not in a position, maybe, to give back.”

“So my relationship, I think, has become more reciprocal now. I think that’s the biggest thing,” she concludes. “I’m so grateful to the bees for providing whatever this is — a window or a door back to nature. I’d love to go backwards. I’d love for this to have happened earlier or for me never to have lost my connection. My hope is for my grandchildren and for other children that they don’t lose it like so many of us. And I hope my book inspires people to go out and look in their gardens. Just that. If it does, then that’s my job done.”