As Lebanon’s financial crisis worsens, migrant workers are being dumped on the streets like ‘trash’

Human rights advocates say the migrants have little to no recourse, and that the situation is bound to deteriorate further as more people in the country cannot afford to pay domestic workers. The coronavirus restrictions also complicate matters.

Ethiopian domestic workers wearing masks sit together with their belongings in front of the Ethiopian consulate in Hazmiyeh, Lebanon, June 8, 2020.

Outside the Ethiopian Embassy in Beirut, a dozen women gather under a small overhang to shelter from the sun. Their suitcases and bags are stacked against the wall. On the ground sits a piece of cardboard with “we want to go home” written in their native Amharic.

Until a few weeks ago, most of the women were living and working inside Lebanese homes as cleaners or caretakers of children and the elderly. But in recent weeks, as Lebanon’s economic crisis worsens, around 100 Ethiopian women have been dumped at the Ethiopian Embassy by their Lebanese employers.

Human rights advocates say these women have little to no recourse, and that the situation is bound to deteriorate further as more people in the country cannot afford to pay domestic workers. The coronavirus restrictions also complicate matters.

For the past two years, Masaret Shefara, who is from Ethiopia, has been working in the home of a family in Beirut. She made just $150 per month before the crisis. A few months ago, the family said they could no longer pay her and dropped her off at the embassy with no money and no way home.

“I just want to go to Ethiopia,” she said, washing her feet and a pair of white socks with a bottle of water while other women rifled through their luggage nearby.

Most of the women have little or no cash. Some don’t even have their passports: Under a sponsorship system for migrant workers, which is known in the Middle East as kafala, employers in Lebanon often take the women’s passports away. Many have been sleeping outside the embassy.

There are around 250,000 domestic workers in Lebanon, which has a population of 6.8 million. Foreign workers from Africa and Asia have long traveled to Lebanon to do domestic jobs, lured by the promise of US dollars — hard and valuable currency that most workers send home to their families. The artificial peg of the Lebanese pound to the US dollar allowed even middle-class Lebanese with relatively low salaries to afford live-in, domestic help. 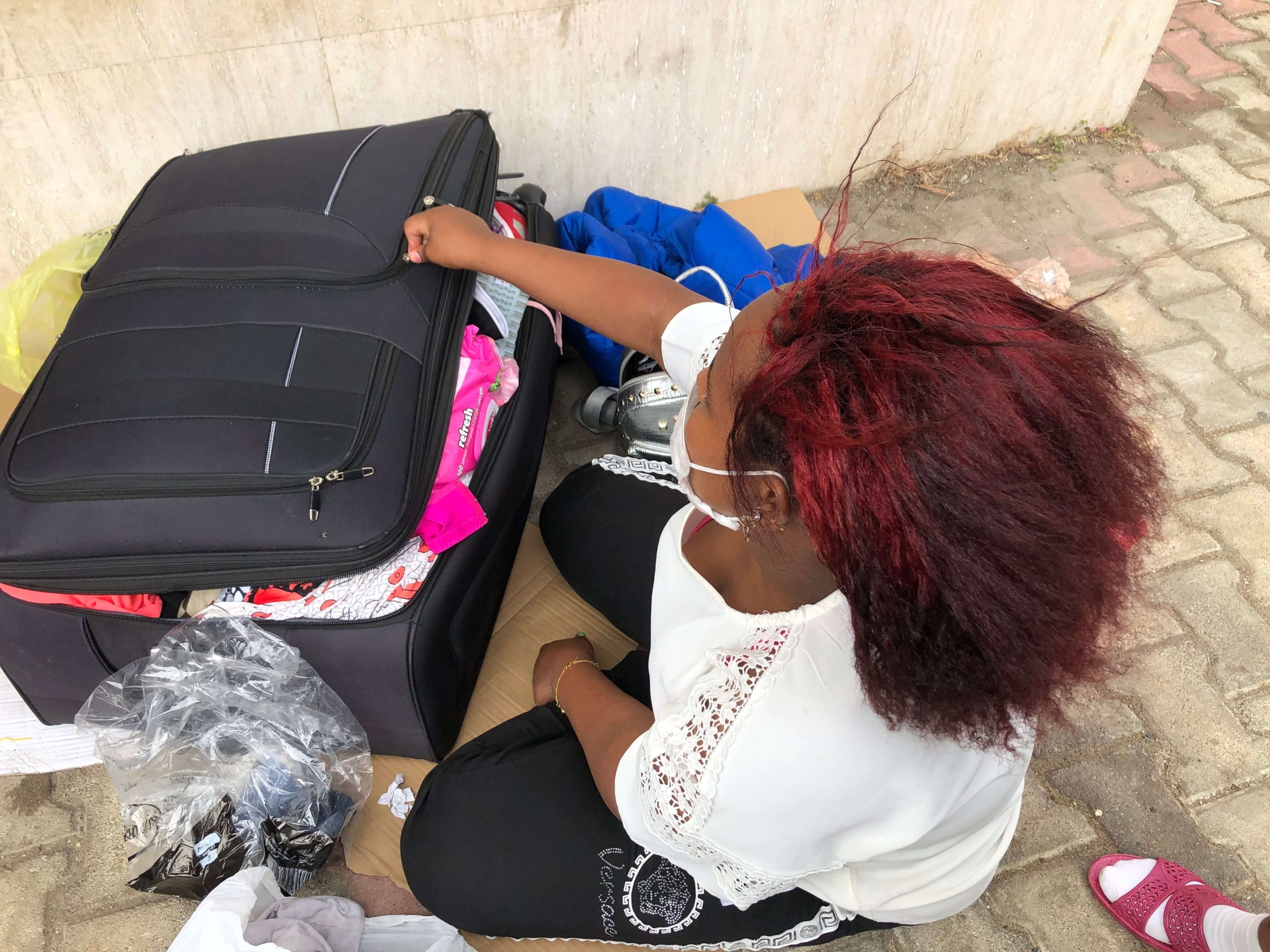 An Ethiopian woman looks through her bags outside the Ethiopian Embassy in Beirut, Lebanon.

But now, the Lebanese pound has lost three-quarters of its value against the US dollar.

That has sent the price of imported goods — which was already high — rising quickly. And it also means that employers like Shefara’s would now have to pay four times the amount in Lebanese pounds to get the US dollars they need to pay foreign staff. Lebanese pounds are useless in Ethiopia.

Farah Salka, executive director of the Anti-Racism Movement in Lebanon, said the financial crisis has just brought attention to kafala, a racist system under which foreigners have been employed here for decades. Salka likens it to slavery.

“The sponsorship system allows you to employ a worker, they say, but basically it allows you to own a person in your house,” Salka said. “To make them work in whatever conditions you see fit.”

The kafala system ties a migrant worker’s immigration status to their employers as their sponsors.

Lebanese labor laws do not apply to foreigners hired under the kafala system, said Salka. That has left them vulnerable to abuse and exploitation.

“Most of these sponsors are getting rid of their workers literally as though they are trash.”

“Most of these sponsors are getting rid of their workers literally as though they are trash,” Salka said.

Many women are owed months of wages, and they have little recourse because they are in the country under the kafala system. Others have suffered forced confinement, physical and mental abuse — even rape. A 2008 Human Rights Watch report found that a domestic worker was dying every week in Lebanon — with suicide being the leading cause of death.

“Falling from high buildings,” a separate category, was the second.

“They need their money and they need to go back home,” Salka said.

But the Beirut airport is closed to regular traffic, due to COVID-19 measures. The women are stuck.

The World was not able to reach anyone at the embassy for a statement.

The Ethiopia Ministry of Foreign Affairs issued a statement on June 12 saying “making the recent surge in the number of COVID-19 patients in Ethiopia, attendees come to understand that Ethiopian migrants should be helped where they are to minimize the risk of infection,” but advocates say there has been little help.

Related: How Lebanon’s ‘WhatsApp tax’ unleashed a flood of anger

Other women outside the embassy say they weren’t dropped here. Instead, they escaped from their employer’s house.

“I ran away here,” Asnagas Lelitho said. “I have my passport but no money.”

Lelitho hadn’t been paid in four months when she escaped and, like Shefara, she was only earning $150 per month. Minimum wage for Lebanese workers is around $450 per month.

Occasionally, people come by to try to lure the women to work in their homes, promising to pay in US dollars. No one is interested.

“I don’t want anything,” Lelitho said. “I just want to go to Ethiopia.”

Other Lebanese employers stop at the embassy to inquire about how they can send their domestic workers home. Some say they would never leave them outside the embassy. 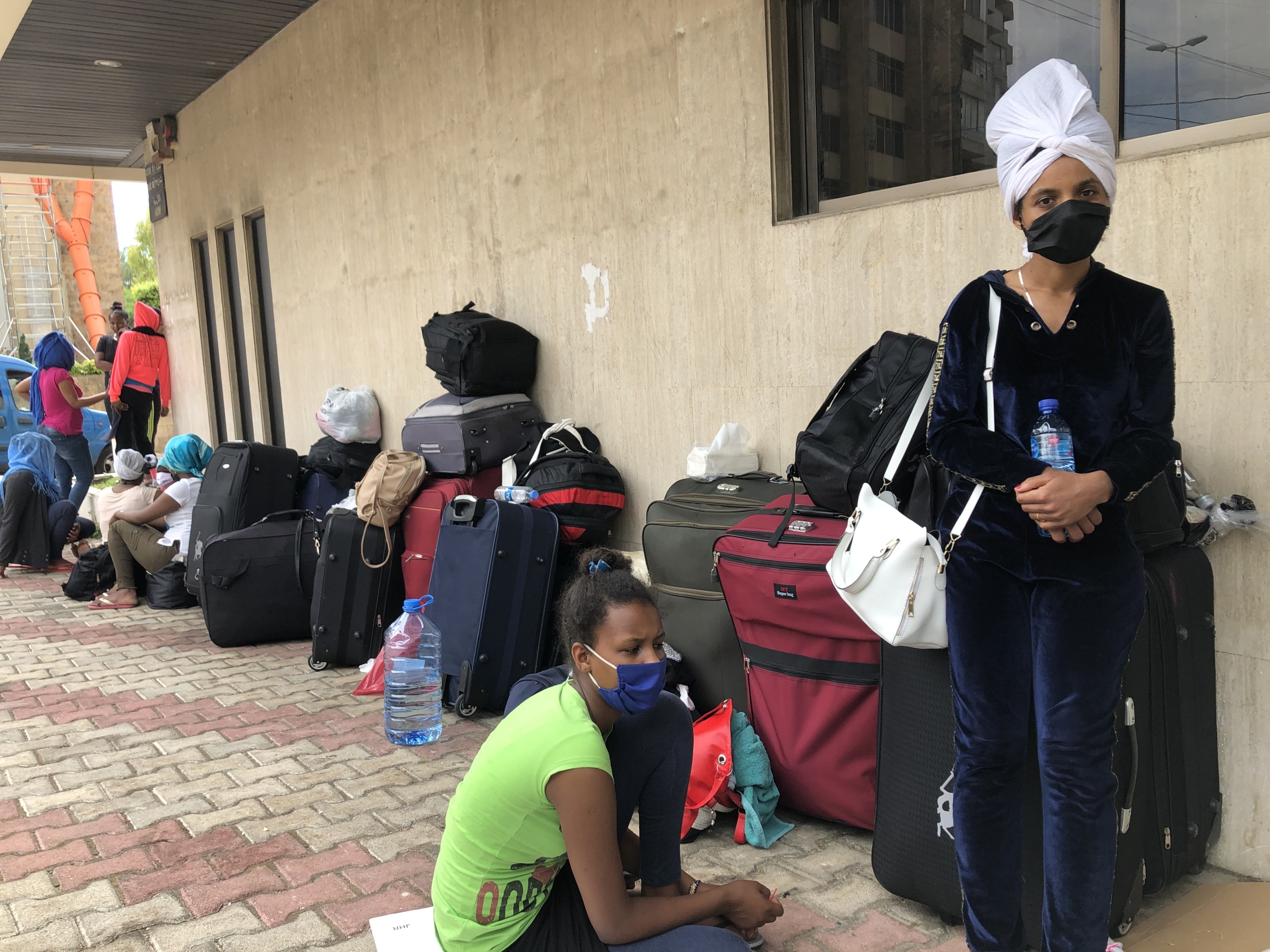 Former domestic workers from Ethiopia wait outside the Ethiopian Embassy in Beirut, Lebanon.

Under increasing pressure, Lebanon’s Ministry of Labor has promised to prosecute the employers who left women in front of the embassy. Employers “who left migrant workers stranded in front of the consulate will be punished by law and will be placed on a blacklist that prevents them from hiring foreign domestic workers again,” Labor Minister Lamia Yammine said in early June.

Ethiopian Airlines have organized repatriation flights, but most have simply no way to get the money. And the women would have to self-quarantine for two weeks once they reach Ethiopia, likely at a hotel — another monumental challenge.

Salka said it’s difficult to know how many women have been discarded by their employers with no way home, but it’s been hundreds this month alone. The majority are Ethiopian, but Lebanon also hosts tens of thousands more workers from Sri Lanka, the Philippines and other African and Asian countries.

As the financial crisis worsens, more and more workers will be abandoned.

“What we are seeing at the Ethiopian consulate is only the tip of the iceberg of what is to come,” Salka said. “We are just at the beginning of the crisis. We haven’t even gotten midway yet.”