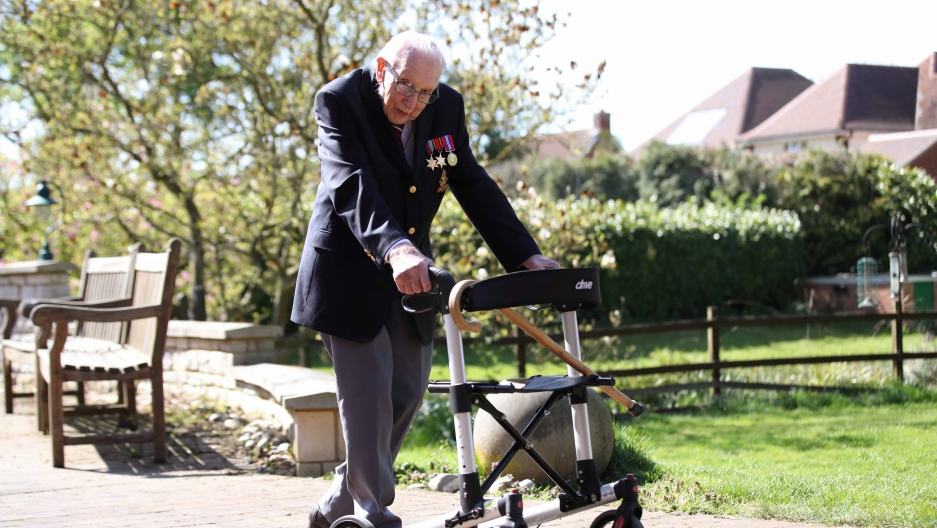 Tom Moore, 99, a retired British army captain, walks to raise money for health workers, by attempting to walk the length of his garden 100 times before his 100th birthday this month as the spread of the coronavirus disease continues, in Marston Moretaine, Britain, on April 15, 2020.

For those having trouble getting in their 10,000 steps per day lately, Tom Moore may serve as an inspiration.

Earlier this month, the 99-year-old World War II veteran, who lives in the town of Bedfordshire, England, set out to walk the length of his back garden 100 times before his 100th birthday on April 30.

On Thursday morning — using his walker and with an honor guard standing watch from a safe distance — he did it.

But Moore’s goal wasn’t just for recreation. He is also raising money for Britain’s national health service, or NHS. He wanted to say thank you for the care he received while recovering from skin cancer and a broken hip.

“I think we must say ‘Well done, National Health Service’.”

“The patience and the kindness that I’ve got from all of them from top to bottom was absolutely amazing. So, anybody who is helping with me and the National Health Service, I’d be very pleased, because they’ve done so well for me and they’re doing so well for everybody else at the moment,” he told the BBC on Thursday. “I think we must say ‘Well done, National Health Service.’”

His daughter, Hannah Ingram-Moore, says a celebration for his centennial birthday will be in order.

“We were planning a big party with a singer, a hog roast from the local butcher, the works,” she told the BBC. “Sadly, of course, we cannot do that. So, we will have a much more low key party and unfortunately, it’s up to me to make the cake, but we’ll do the best we can.”